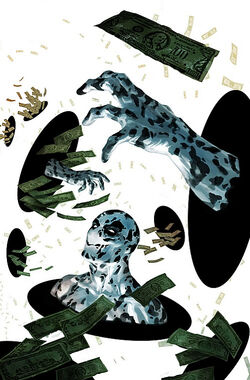 Jonathan Ohnn earned his doctorate at the Massachusetts Institute of Technology, where he was roommates with Quentin Beck.[3] As a scientist working for the Kingpin, Dr. Ohnn was assigned to reproduce the radiation levels of Cloak to find a way to artificially mimic his powers. Working late one night, he succeeded, creating a solid black circular portal. In doing so, however, the drain on the city's power became so great, a blackout washed over the city, causing the portal to shimmer and destabilize. Fearful of losing a once in a lifetime opportunity, Ohnn stepped into it; the shock of the transition caused him to pass out. He awoke floating weightlessly in a dimension which he initially assumed was Cloak's dark dimension. He soon realized however that the power shortage caused the portal to send him to a different dimension, a place of half darkness and half light. A seemingly infinite number of portals surrounded him in this place. Making swimming motions, he managed to find the original portal that brought him there and slipped back through it.[4]

When Ohnn emerged back in his lab, his body had undergone a radical transformation. The portals from the other dimension had adhered to his skin, covering him with black spots from head to toe. Realizing the spots were portable space warps, he started to think he might be able to use them to defeat anyone in battle. When Spider-Man and the Black Cat arrived to confront the Kingpin, he appeared before them and announced himself as the Spot. Spider-Man collapsed on the roof, laughing at the name.[4] The Spot ended up winning that first confrontation and warned the heroes to leave the Kingpin alone.[5] He later lost a second battle against Spider-Man because he was tricked into throwing too many of his spots as weapons and not keeping enough to defend himself with.[6]

Later, the Spot formed a short-lived team with Gibbon, Grizzly, and Kangaroo called the Spider-Man Revenge Squad. This team fell apart when Spider-Man carted the Spot and the Kangaroo to jail for bank robbery.[7][8]

Sometime later, the Spot was captured by an organization called The Gideon Trust and was forced to open a portal to the Negative Zone. The Gideon Trust hoped to investigate and exploit the natural resources of the Zone for their own purposes, but were defeated by the Fantastic Four who were trapped there at the time.[9][10]

The Spot later helped Tombstone escape from a maximum security prison. As a method of thanking him, Tombstone snapped his neck.[11]

Despite this seeming death, he was killed by Elektra and a group of Hand ninjas during a meeting with Slyde.[12]

Hydra, The Hand, and the mutant group Dawn of the White Light began a plot to end all life on earth. Ohnn was resurrected by The Hand and joined an assault on the S.H.I.E.L.D. Helicarrier, which resulted in its destruction.[13] He was then killed again by Wolverine as were most of the super-villains and heroes The Hand were using in the attack. As before, his final death remains questionable.[14]

He joined M.O.D.O.K.'s 11 and was sent by the Mandarin to his own dimension, but because he didn't knew how he entered he couldn't get out for some years. [15]

Occasionally he could project his image back to our world and tried to contact some of his old cronies at the Bar with No Name but that attempt was unsuccessful.[16][17]

When he managed to return to his own dimension, Ohnn wanted to kill the Russian mob boss Dmitri Ivankov who he believed guilty of ruining his life while we was trapped in his dimension, but was stopped by Spider-Man, who convinced Spot to let Ivankov live.[18]

He joined the Hood's Gang. It was later revealed that he served as a mole for Mister Negative under the promise that he would be cured once the Maggia crime families were wiped out.[15]

Origin of the Species

Spot was invited by Doctor Octopus to join his team, promising each of them a reward in exchange for securing some specific items for him.[19] Ever since Lily Hollister's baby was stolen by the Chameleon, Spider-Man had been going on a rampage against any villains involved. The police ended up receiving a web ball containing Spot, Diablo, and Overdrive.[20][21]

Later, he was hired by Sal Donoratti to kidnap the daughter of Deborah Giacomo, thinking the family would pay a lot for the safety of the child. Spot killed Donoratti so he couldn't speak while fighting Daredevil. Thanks to Daredevil's radar sense, Spot was not much of a challenge for the hero, who was easily knocked out.[22] However, the Spot was captured and restrained and his powers were recreated by an individual called Coyote, working for an unknown figure trying to bring Daredevil down.[23][24]

Boomerang and Owl hired Spot onto the Sinister Sixteen, assembled to distract the Chameleon's forces while Boomerang stole from him.[25]

Black Cat tried to recruit a group of villains, but they declined because of her affiliation with Electro. She then thwarted Parker Industries' plan to create a prison for super villains, nearly killing Electro, but was stopped by Spider-Man and Silk. After that, Spot and other criminals joined her army.[26]

Spot was found by Spider-Man during an attempt to steal fossils. Noticing the shift in targets, Spider-Man theorized that Spot was luring him into a trap; however, Spot was knocked out by another Spider-Man before their fight could escalate.[2]

After Secret Empire, Wilson Fisk became interested in Darkforce and wanted similar powers to be put in his use. He found Spot and captured him, and using technological advancements, managed to use Spot's powers to capture Kindred even when Ohnn didn't want to.[27]

Teleportation: As a being exposed to the Spotted Dimension, Ohnn's skin has been bleached white and dotted with warps in space. The spots can transport things or people to another area by way of passing through the Spotted Dimension and coming out in another 'spot'. Ohnn can also teleport himself or extend parts of his own body over various distances as defined by his spots. He has the ability to move the spots all over his body or take them off and place them somewhere else. The spots can even be suspended in mid-air.[28][29][30]

Like this? Let us know!
Retrieved from "https://marvel.fandom.com/wiki/Johnathon_Ohnn_(Earth-616)?oldid=6425882"
Community content is available under CC-BY-SA unless otherwise noted.