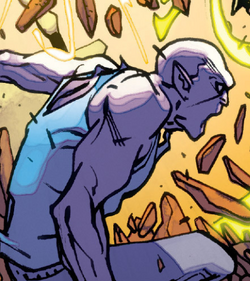 Graymalkin was among heis fellow X-Men teammates who were playing a game of baseball when the Press Gang from Genosha attacked them in order to kidnap their healer Triage.[1]

Graymalkin assisted in the battle but eventually was taken hostage as the Press Gang transported via a possessed Tempus's abilities back to Hammer Bay in Genosha. He was subsequently locked up in a cell next to Wolverine and Bombshell.[2]

After Phoenix brought a select group of X-Men to the island to engaged the Press Gang, Longsot made his way into the sub-levels to rescue Graymalkin and the others from captivity.

Graymalkin joined with everyone as they took on the resurrected Cameron Hodge. After the sacrifice of so many defeating Hodge, Graymalkin stood with the other X-Men as they mourned their losses.[3]

Seemingly those of the Jonas Graymalkin of Earth-616.

Seemingly those of the Jonas Graymalkin of Earth-616.

Like this? Let us know!
Retrieved from "https://marvel.fandom.com/wiki/Jonas_Graymalkin_(Earth-24201)?oldid=5672123"
Community content is available under CC-BY-SA unless otherwise noted.