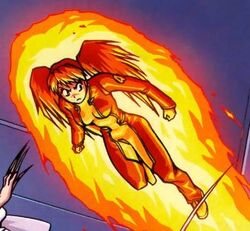 Flaming Plasma Metatalent: Jonatha's Metatalent allows her to surround herself in a burning plasma like energy. Later on she manifests this power to achieve flight.

Metatalent Augmentation Suit: The standard suit for the team, they contain an internal power source to allow them to generate Megascale Metatalents.

Like this? Let us know!
Retrieved from "https://marvel.fandom.com/wiki/Jonatha_Storm_(Earth-2301)?oldid=6124535"
Community content is available under CC-BY-SA unless otherwise noted.