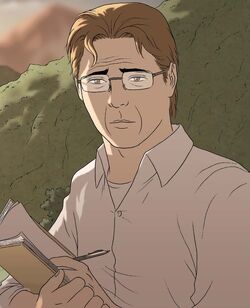 Jonathan Drew was geneticist and research partner to Herbert Edgar Wyndham. In 1928, he attended a genetics conference along with, Noah Black and Arnim Zola.[2]

They found large amounts of uranium in their property, which gave them the financial resources to build a research facility to keep working on their controversial studies of evolution, genetics and cell regeneration. In the course of the next three years, life was good, until little Jessica became ill, poisoned by her long-time exposure to the Uranium that was so prevalent in their land. Jonathan, being an expert on the regenerative and immunological properties of arachnids' blood, injected Jessica with an untested serum made with the blood of several uncommon species of spiders, in the hopes of stopping the tissue damage and immunizing the girl from the Uranium radiation in her blood.[3]

Then, he sealed her in a genetic accelerator created by Herbert Wyndham (aka the High Evolutionary) to speed the process, but it only seemed to work at a very slow rate. In stasis for decades, her aging greatly slowed, she awoke with no memories of her past, to a world in which both her parents had disappeared mysteriously, and possessing powers that made everyone around her scared and resentful. Jessica lived in the Wundagore citadel until the High Evolutionary left Earth.[3]

Like this? Let us know!
Retrieved from "https://marvel.fandom.com/wiki/Jonathan_Drew_(Earth-616)?oldid=6095939"
Community content is available under CC-BY-SA unless otherwise noted.