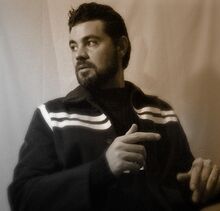 Jonathan Hickman is currently working on X-Men after finishing House of X and Powers of X.

Hickman was the runner-up in the first Comic Book Idol competition, and went on to draw and write a number of series.

He is the creator of The Nightly News, published under Image, and has also worked on Marvel's Legion of Monsters, on the story N'Kantu, the Living Mummy: MustDie/EatSoul.

He has collaborated with Brian Michael Bendis and editor Tom Brevoort on a new Marvel ongoing series, entitled Secret Warriors. It follows Nick Fury and a group of superpowered operatives as they undertake espionage operations in the wake of Secret Invasion. Stefano Caselli will be the artist; and also collaborated with artists Dale Eaglesham and Steve Epting on Fantastic Four and with Sean Chen on the limited series Dark Reign: Fantastic Four.

Hickman's work on Fantastic Four, S.H.I.E.L.D. and Secret Warriors has garnered him immense praise and is now considered one of the best and most unique writers in the industry.

Upon ending Fantastic Four series with issue #588, Jonathan Hickman and Steve Epting launched the new series called "FF" or Future Foundation which sees the remaining Fantastic Four team members expand their roster to include Spider-Man, among others.

Like this? Let us know!
Retrieved from "https://marvel.fandom.com/wiki/Jonathan_Hickman?oldid=6836924"
Community content is available under CC-BY-SA unless otherwise noted.