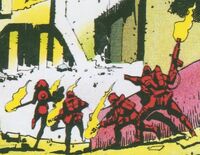 Base of Operations
Formerly The 'Pool[1]
Affiliations

Place of Defunction
The 'Pool[1]

The Jones Boys were an ex-Game team who made their base in the 'Pool.

In 8162, they failed to make their payment to the National Union of Retired Sports Experts (N.U.R.S.E.). Desperate to repay their debt to avoid being eliminated, their leader, Incinerator Jones ordered a raid on the base of the Evil Dead. This endeavor also failed due to the efforts of Death's Head hired by Death Nell for protection on the one side and of Dragon's Claws sent by N.U.R.S.E. to eliminate the Jones Boys on the other. The last surviving member, Incinerator Jones's son, was brought to N.U.R.S.E. Central to make sure there were no loose ends left and killed there by Silas Stenson.[1]

Retrieved from "https://marvel.fandom.com/wiki/Jones_Boys_(Earth-5555)?oldid=5003071"
Community content is available under CC-BY-SA unless otherwise noted.