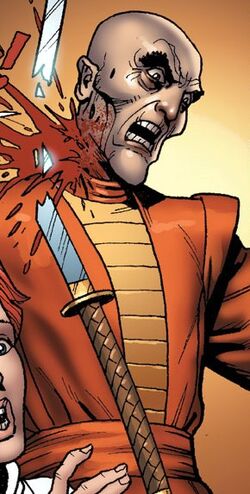 After the Hand broke a long-time agreement in Madripoor with the criminal mastermind Romulus, the Jonin was searching for other allies, and he found them in the person of Baron Wolfgang von Strucker.[2][3]

As an act of loyalty to the Hand, Strucker brought to the Jonin the young Russian killer Natalia Romanova, sought by the Hand who wanted to make her their Master Assassin. However, Strucker did not knew that Natalia was secretly an agent of Romulus, who had assigned her the mission to kill the Jonin. The Hand performed a ritual where the Jonin gave Natalia his sacred sword; she was going to kill him, but Logan, another agent of Romulus who had trained and saved Natalia several times, popped up from shadows and killed the Jonin instead, avoiding making Natalia a killer again.[2][1]

Like this? Let us know!
Retrieved from "https://marvel.fandom.com/wiki/Jonin_(WWII)_(Earth-616)?oldid=5883358"
Community content is available under CC-BY-SA unless otherwise noted.