Missing half his face and most of his chest, formerly had grey skin, blue lips, facial markings and Akkaba tattoo ("Apocalypse" form)

Nobody wants to be alone… not even we monsters.

Jonothon Evan Starsmore ("Jono" to his friends) was a native of London and a mutant who possessed a furnace of psionic energy in his chest. This power first manifested in an explosion that destroyed much of his chest and lower face and crippled his then-girlfriend Gayle Edgerton. As a result of his disfigurement, Chamber could only speak via telepathy.[7]

Shortly after his mutant powers manifested, Jonothon accepted an invitation to join Xavier's School for Gifted Youngsters. At the airport, he was attacked by Emplate, a vicious evil mutant who fed on mutant genetic material to survive, and the fledgling team of Generation X (M, Husk, Synch, Skin, and Jubilee) arrived to fight Emplate off.[8] Shortly after, Chamber convinced the crazed Penance to stop attacking the team, as he could sympathize with her freakish appearance; she came to live with the team.[9]

Some months later, Emplate captured Chamber with Gayle's help, and then imprisoned both of them. Gayle blamed Jono for ruining her life, but the two managed to get over the pain after the rest of Generation X freed them.[10] Chamber later became romantically involved with Husk, although their relationship was awkward and strained, and was terminated on more than one occasion.[11][12][13]

Chamber grew even more depressed when he saw that Synch, who could duplicate a nearby mutant's powers, was more proficient with Chamber's own powers than Chamber himself was.[14][15] When the school was outed as harboring mutant students, an anti-mutant group attacked the school. After Synch was killed preventing a bomb from killing nearby human students, the Generation X kids felt that their training was over, and they had to use their powers to help humanity.[16]

When the students moved on from the Massachusetts Academy, Jono was offered a position with the X-Men. He declined however and returned to London, where he hooked up with pop star Sugar Kane, creating a publicity blitz for the singer, but Chamber ditched her after she told him she was using him for her image and joined the X-Men.[17]

As a X-Man, Chamber investigated the apparent murders of mutant students of the pro-species-coexistence Students for Tolerance at Empire State University. He got to know a reptilian mutant, Amber, and also Walter, a paraplegic formerly hostile to the mutants but who later joined the new ESU-Xavier Institute exchange student program. The relationship with Amber quickly ended before it began when she came to believe he was only interested in her when she used her shapeshifting abilities to take on a more conventionally attractive form. After that he asked to be relieved from active duty with the X-Men, claiming that he still had much to learn.[18]

Returning to the X-Men, Chamber saw Husk in the arms of Archangel.[19] After this, he destroyed a bar with his mutant powers, and the X-Men turned him over to the police after he punched Warren in the face. While in prison, locked in a power-dampening helmet, Chamber received a visit from Brent Jackson, who offered him an invitation to join the Weapon X program. He accepted, though in reality he infiltrated the group on behalf of the X-Men. Weapon X restored his damaged body, but in the end, there was a rebellion in Neverland.[20] Chamber made sure to help as many of his fellow mutants as he could, but this happened during M-Day. Chamber, like many of the mutants in Neverland and those being held by Weapon X, lost his powers. His new device that held his mutation at bay got destroyed, leaving a gaping hole in his chest and no jaw.[5]

Probably due to his psi-powers replacing most of his lungs and heart, Cyclops was unsure if Chamber had lost his powers. When they found out, Beast made a machine to keep him alive and Cyclops left him to be cared for at a hospital on life support while things cooled down at the mansion, and he was visited by the reporter Sally Floyd,[5] Frederick Slade posing as a therapist, and by the English mutant Pete Wisdom of Excalibur.[4] 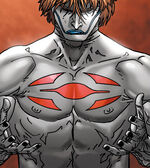 He was offered membership in the Clan, but he rejected the offer, and left without opposition. He immediately ran into the new Excalibur team, who were looking for him since his abduction by the Clan. They offered to let him join them, but Jono said that he had had it with the X-Men and he just wanted to live his own life.[4]

After that, he moved to New York, where he joined former teammate and former mutant Jubilee on the New Warriors in hopes of fighting crime outside the constraints of the Registration Act. When the New Warriors leader, Night Thrasher, found Jono he had been about to commit suicide, unable to live with his Apocalypse-like appearance.[21]

Repowered and Rejoined the X-Men

After the events of Age of X Jono was repowered and returned to his old appearance.[6] He was said to be taking the return of his power (and subsequent loss of his chest and lower face) very hard.[22] He stayed on Utopia and rejoined the X-Men.[23]

Jono chose to go with Wolverine to start the Jean Grey School. He gave classes about the physical change of the mutation. While doing so the class was attacked by Weapon Omega which forced Jono to defend his students.[24]

When David Haller lost control over his power and sub-personas due to the mental shock caused by his father's death, he started to wreak havoc around Asia. Chamber was part of the team that was assembled to track him down and stop him. When the X-Men finally found Haller and engaged in battle with him, David used the power of his sub-persona named "The Skinsmith" to warp the skin around the hole in Chamber's chest and face causing the pressure from his power to build up. However, the pressure was stabilized by Beast by creating a hole with a pen. Chamber and the rest of the team chased David into an ammo store. Chamber fired a blast at the hut causing the ammo to explode and seemingly incinerate David. David escaped however, by folding reality and escaping.[25]

Later, Blindfold recruited Chamber, along with Frenzy and Pixie, to aid Legion in a fight against the Red Skull.

When one of Legion's sub-personas went rogue and attacked the planet, infecting the human populace with overwhelming hatred and attempting to cause a nuclear war to wipe out the world, Chamber was one of a team of X-Men that responded to Legion's calls for aid. Chamber was killed by a blast of energy fired by the monster.[26]

Later, he was resurrected by Legion, with his former powers restored and the Akkaba enhancements absent.[27]

Going back to Xavier's School,[28] he eventually became the mentor of a new generation of students, alongside his former teammate, Jubilee. Bonding through misadventures involving Shogo and their students, Jono and Jubilee grew closer and got romantically involved.[29][30][31]

After the mutant decimation caused by Nate Grey and Jubilee's apparent death, Chamber went underground, joining and leading the mutant community of Morlocks. Dedicated to protecting his community, Jono refused Cyclops' offer to rejoin the X-Men. However, the Morlocks once again came under attack from the Marauders, and with much of their number slaughtered, Jono rejoined the team to secure a safe haven for the surviving members, and also to pursue the Marauders. When the X-Men finally tracked down the Marauders, there was a short fight after the Marauders proclaimed their innocence. Chamber, not believing them, burned them to death. Their death was avenged by Harpoon, who struck Chamber with an energized harpoon. Though Hope Summers avenged this injury, Chamber succumbed to his wounds.[32]

Following the foundation of a mutant state in Krakoa by the hand of Charles Xavier and his allies, Chamber resurfaced as a citizen of the nation, having been presumably reborn by the hand of The Five, a group of mutants capable of combining their powers into a process of resurrection, brought together by Xavier as part of his plans for mutant ascension. Chamber joined the reformed New Mutants and went on a mission to the Shi'ar Empire with the intent of bringing Cannonball to Krakoa.[33]

Chamber is a mutant. 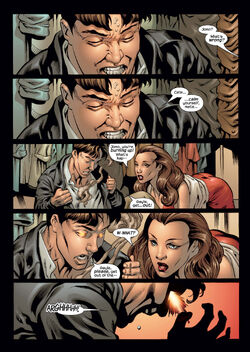 He was for a time depowered,[5] but later repowered by Apocalypse's blood along with an "Apocalypse" look, but didn't show any use of his restored powers.[4] Legion's reality warping recreated his old appearance along with his powers.[6]

He was stated by Pete Wisdom to be a potential Omega-Class mutant, after his repoweration by Apocalypse's blood.[4]

Psionic Biokinesis: Chamber was a mutant who was naturally composed of pure psionic energy. In truth his physical body was just a shell for what he truly was. The initial emergence of his powers blew a hole in his chest and lower face, completely incinerating most of his internal organs. Because of this, Chamber no longer needed to eat, drink, or breathe. Oddly enough, Chamber's blood did continue to flow through his extremities, as if propelled by a churning engine of psionic flame itself. However, he was sustained solely by the psionic flame that raged within his body. If it were somehow snuffed out, he would most likely have died. But then, he might argue that he already died once, and came back, so his reaction to a disruption of his mutant abilities may still have been unclear. As his flames were actually psionic in nature, and didn't rely on some form of fuel to continue to burn, they didn't seem to be affected by conditions that would be adverse to actual flame (i.e. lack of oxygen, water, etc.)[34]

It was once suggested that Starsmore's physical form disintegrated a little more with each use of his power. The full range, extent, and nature of Starsmore's psychic abilities are unknown.[36]

Because of the large infusion of Apocalypse's blood, Jonothon may or may not have had the other powers of Clan Akkaba such as enhanced strength and durability, as well as the ability to reshape his limbs into weapons. It was shown that his radiations were back along the cure, and was stated to be powered, even potentially to an Omega-class level.[4]

Chamber used to possess the normal human strength of a man his age, height, and build who engages in moderate regular exercise, but his new strength level is unknown.

Sonic powers technology: Jonothon, as Decibel, used advanced technology to create sound-based energy powers of an unknown degree. He was shown flying, creating individual force fields around multiple targets (four shown), creating solid-sound energy constructs (a giant wall and a backhoe), and two different types of energy blasts, one from his mouth and another from his hands.

Retrieved from "https://marvel.fandom.com/wiki/Jonothon_Starsmore_(Earth-616)?oldid=5851385"
Community content is available under CC-BY-SA unless otherwise noted.