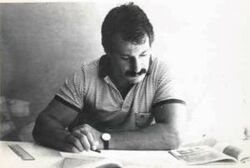 Zaffino spent a lifetime working as an artist in and out of comics. At the age of 16, he began working as an unpaid apprentice at the comics studios of Ricardo and Enrique Villagran in Buenos Aires, where his father had requested that they take him on. Zaffino made himself a recognised name in his country, working many years in important argentine comics, like Nippur de Lagash.

In the mid-1980s, Zaffino made a trip to the U.S. with Ricardo Villagran, who was working for Comico at the time. On that trip, Zaffino met comics writer Chuck Dixon, and together they produced Winter World, a three part series for Eclipse. They continued to collaborate on comics, producing the seminal Punisher graphic novels Kingdom Gone and Assassin's Guild, and a Savage Sword of Conan story titled The Horned God. During this time, Zaffino worked regularly with comics writer Dan Chichester on various comics, including Critical Mass, and Terror Inc.. He did relatively little work in the U.S. comics industry, where he is mostly known for his art in Punisher, Clive Barker's Hellraiser and The 'Nam for Marvel Comics. He continued working for the Argentine comic market, but focused on his work as a painter.

Like this? Let us know!
Retrieved from "https://marvel.fandom.com/wiki/Jorge_Zaffino?oldid=6838959"
Community content is available under CC-BY-SA unless otherwise noted.