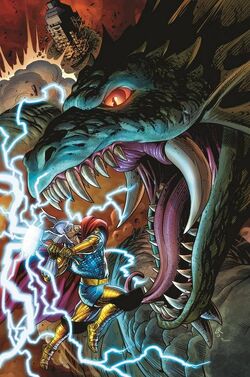 Jormungand; however, not only survived in the oceans but grew to incredible size. At his full-size, Jormungand was enormous enough to encircle the entire planet. Hence Jormungand became known as the Midgard Serpent. It was prophesied that on the day of Ragnarök, when it is said that most of the gods of Asgard will perish, that Odin's son Thor, god of thunder, would kill the Midgard Serpent. But then, the prophecy continued, Thor himself would die as a result of the Midgard Serpent's venom.[citation needed]

The Frost Giant Utgard-Loki once challenged Thor to lift his cat from the ground. With tremendous effort, Thor finally succeeded only in lifting one of the cat's paws off the ground. Thor felt foolish at having been unable to do more, but in fact, he had performed an extraordinary feat, for the cat had actually been the Midgard Serpent, who had used his magical ability to cast an illusion to disguise himself. Hence, Thor had actually succeeded in the seemingly impossible task of raising the Serpent's immense bulk into the air.[citation needed] After learning that the cat had been the disguised Jormungand, Thor decided to try to thwart the prophecies of his own death by killing the Midgard Serpent. Journeying out onto the seas in the boat of the giant Hymir, Thor used an enchanted line to fish for the submerged Jormungand. The Midgard Serpent took the bait on the line, an ox's head, and Thor raised Jormungand to the surface. Terrified, Hymir severed the enchanted line, thereby releasing Jormungand.[citation needed]

In recent years, Loki and the Asgardian war god Tyr stole the Golden Apples of Idunn, which ensured the Asgardians' longevity, and concealed them in the Midgard Serpent's gullet. In preparation for Loki's and Tyr's invasion of Earth, Jormungand, in ethereal form, constricted the planet with his coils, thereby magically causing widespread storms, earthquakes, floods, and landslides. Jormungand also used his incredible size to bridge the interdimensional distance between Asgard and Earth, so that the army of Loki and Tyr could travel to Earth along his back. Thor, again in Hymir's boat, traveled across the "sea of space" outside Asgard and confronted and battled the Midgard Serpent. Finally, Jormungand declared their battle to be stalemated and agreed to disgorge the Golden Apples, which had remained uneaten in his gullet. After reclaiming the Apples, Thor bound Jormungand to the roots of the world-tree Yggdrasill. Loki had already turned against Tyr, and the forces of Odin defeated Tyr and his army.[citation needed]

Still more recently, in vengeance for a humiliating defeat by Thor, Hela cast a spell on him making him incapable of dying, but also incapable of healing from injuries. As protection, Thor created a suit of virtually indestructible armor for himself. Seeing their chance for their own vengeance on Thor, a band of Frost Giants went to Earth and attempted to find the Midgard Serpent. Jormungand appeared to them in the form of the gigantic ancient Chinese dragon Fin Fang Foom. Learning of the curse that Hela put on Thor, the disguised Jormungand was pleased to comply with the Giants' request that he attack Thor. Though Jormungand could not now kill Thor, he intended to wreak such damage on the thunder god's body as to render him forever helpless, thereby thwarting the prophecy that Thor would someday kill him. As Fin Fang Foom, Jormungand arrived in New York and encountered Thor, but did not recognize him due to the thunder god's new armor and beard. Thor did not realize that in Fang Foom was Jormungand, either. After arriving in a deserted area to do battle, Jormungand and Thor revealed their true identities to each other, and Jormungand allowed Thor to see his true form. A tremendous battle ensued, which ended when Thor used his full strength and the entire power of his enchanted hammer, Mjolnir, to deliver the death blow to Jormungand. The Midgard Serpent vanished from sight on Earth upon dying, presumably returning to ethereal form. The extraordinary energies generated by Mjolnir combined with the impact of the death blow to Jormungand reduced Thor's body to a gelatin-like mass of flesh. Yet, due to Hela's curse, Thor still lived. His spirit took over the form of the Destroyer and he then forced Hela to resurrect him in his true body, fully restored to health and free of her curse. By slaying the Midgard Serpent, Thor has escaped his own prophesied fate of being killed by Jormungand. Ragnarök, if it ever came, would, therefore, take place in a somewhat different manner from the way it has been foretold.[2]

With the final incursion drawing near, King Loki made a deal with Hela and Tyr to unleash the Midgard Serpent from Hel, in an attempt to destroy Midgard and thereby save the universe.[3]

To this end, the Draugr attacked Asgardia; however, Jormungand was defeated when Freyja, the All-Mother, sacrificed her own life to permanently destroy it and it's spirit.[4]

The serpent returned to life through unknown means. Following the War of the Realms when Thor became the new All-Father, Jormungand took the opportunity to go to Donald Blake's dreamscape where it revealed to Blake that all his life was fake, in an attempt to make him his pawn against the Asgardians. However, Blake retaliated by taking the serpent's power for himself and combining it with the Odin-Force inside of him, allowing Blake to mortally wound Jormungand. After Thor switched places with Blake once again, he came across the serpent who in his dying breath explained what happened with Blake and warned him about the threat he posed before expiring.[5]

In addition to his vast superhuman strength, the Midgard Serpent was virtually invulnerable to injury. Only a being as strong a Thor could cause him serious bodily harm. The Midgard Serpent was apparently immortal except for the fact that he could be killed by extraordinary physical force.[citation needed]

The Midgard Serpent usually existed in an ethereal form on Earth. Hence, though his size was so great that he encircled the planet, he was invisible and intangible as far as human beings were concerned. By compressing his coils about the planet, he could magically cause storms, earthquakes, and other disasters. Even in his final battle with Thor, although his front portion materialized on Earth, Jormungand kept most of his body in ethereal form. If he had not, his immense bulk would have crushed buildings and people around the globe.[citation needed]

The Midgard Serpent could cast illusions to disguise his true appearance, such as when he caused himself to appear as Fin Fang Foom and as Utgard-Loki's cat.[citation needed]

The Midgard Serpent's venom was lethal, even to Asgardian gods.[citation needed]

When the Midgard Serpent materialized part of himself on Earth disguised by an illusory form, the passage of time on Earth continued as usual; however, by materializing at least part of himself on Earth in his true form, Jormungand magically affected the passage of time, so that time on Earth stood still except for any living beings native to Asgard, Jotunheim, or others of the Nine Worlds of the Asgardian cosmology who were present there, though presumably native of realms such as Mount Olympus would not be "frozen" in time either. Hence, while Thor had his final battle with Jormungand, no human beings, plants or animals moved or were aware of the battle. Birds or aircraft "frozen" in flight by the stoppage of time were not pulled to the ground by the force of gravity, though gravity continued to affect Thor and Jormungand. Upon Jormungand's demise, the serpent corpse returned to ethereal form and time resumed its normal course on Earth.[citation needed]

The Midgard Serpent was a sentient being and was fully capable of human speech. Unlike other serpents, he possessed clawed forearms.[citation needed]

The Midgard Serpent possessed superhuman strength, the extent of which was never measured but which far surpassed Thor's Class 100 level, whereby Thor can lift well over 100 tons.[citation needed]

Like this? Let us know!
Retrieved from "https://marvel.fandom.com/wiki/Jormungand_(Earth-616)?oldid=6080341"
Community content is available under CC-BY-SA unless otherwise noted.