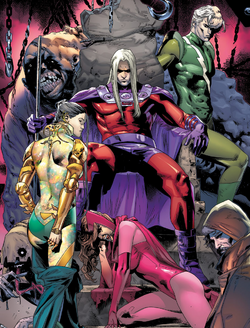 Several weeks of serving as a guinea pig is a small price to pay to learn the truth about my very existence, Ruth.

The villain known as Holocaust rampaged through Avalon in an attempt to kill Magneto and his followers. Avalon was destroyed. Magneto, in a comatose state, was saved by then-Acolyte and former X-Man Colossus, who used an escape pod to crash to Earth. Ultimately, however, Magneto's body was lost. He was later recovered and restored to health by his first recruit for his Brotherhood many years ago, Astra. Astra also created a clone of Magneto in order to have it kill him, but Magneto escaped and the clone was lost and amnesiac.[3]

The clone was found, sick with fever, by small children who belonged to the Holy Sepulcher Orphanage in Guatemala. Sister Maria de la Joya of the orphanage nursed him back to health, but he proved to have no memory of his past. One of the orphans who had found him, Migdalia, gave him the name Joseph. Over the following months Joseph displayed the superhuman ability to manipulate magnetic forces. Sister Maria suspected he might be the mutant terrorist Magneto, who had recently vanished, despite the fact that Joseph seemed to be in his twenties, making him younger than Magneto had been. However, she was willing to give him a second chance in life.[4]

At one point criminals captured Sister Maria and the children in order to force Joseph to aid them in fighting law enforcement agencies. In rescuing the hostages Joseph slaughtered their captors. The children who had grown to love Joseph were horrified at what he did and he knew he had to leave. Sister Maria told him about the team of mutant adventurers called the X-Men, and Joseph left for the United States of America to seek help from them.[4]

The X-Men believed Joseph to be an amnesiac Magneto but nonetheless allowed him to join their team. Like Magneto, Joseph grew quite close to team member Rogue.[5] His subsequent encounter with Magneto's former minions, the Acolytes, convinced him that he had indeed been Magneto.[6]

However, Magneto reappeared and made another bid for political power by creating another Earth-wide electromagnetic pulse and then merging with the part of the atmosphere called the magnetosphere to gain ultimate power. The X-Men, Joseph, and Astra confronted Magneto, and Joseph sacrificed himself to stop Magneto's schemes, an action which left Magneto temporarily without his powers.[7]

Joseph was resurrected by Astra and reappeared at a mutant hate rally, murdering all the participants, causing the Avengers to question Magneto on the events. Cyclops defended Magneto claiming that Magneto had been with him on a mission miles away during the attack. To prove his innocence Magneto asked for the help of Emma Frost.[8]

With her help they revealed it was Joseph and his new Brotherhood of Evil Mutants, consisting of deformed clones of the original members. Joseph tried to get Magneto to return to his former ways of terrorism, but Magneto refused, leading to a fight between them. Magneto forced Astra to betray Joseph and took her back to Utopia.[9]

Astra was forced to reveal that Joseph had been working with Christopher Bach in order to bring back fear to Magneto's name. In a final battle Magneto killed the rest of Joseph's brotherhood and Joseph and Astra were imprisoned in the X-Brig on Utopia.[10]

After the destruction of Utopia in the war between the Avengers and X-Men, Danger released all prisoners on the X-Brig, including Joseph.

After the loss of Magneto, Joseph disguised himself as the Master of Magnetism and formed a new Brotherhood in the wake of the death of the X-Men. He brought them to a Air Force base in East Transia to stoke fear in humankind because of the spike in anti-mutant violence. But they were confronted by a new group of X-Men led by a resurrected Cyclops. After the battle, Joseph's ruse was revealed making Juggernaut mad because he thought the group was made to protect mutants. He attacked Joseph and held him down while Scott and him talked about ideologies. But before anyone could see what was going on, Joseph was killed by Kwannon who considered Joseph a threat to mutantkind.[11]

As a clone, his powers were identical to Magneto's, and like Magneto, Joseph was stated to be among the most powerful mutants.[12]

Magnetokinesis: Joseph could shape and manipulate electromagnetic fields that existed naturally or artificially, allowing him to lift and move heavy objects, control ferrous particles in the atmosphere, and even alter the Earth's magnetic field. It was unclear, however, whether he had to draw magnetic force from outside himself (if so, then he could do so over vast distances).

Joseph's power was for all practical purposes limitless. Even before his rejuvenation, Magneto once lifted a cargo freighter weighing 30,000 tons 50 feet into the air from a distance of 300 feet away. Although Joseph often gestured when using his magnetic powers, he could utilize them fully merely by concentrating.

Joseph had the ability to fly by riding the electromagnetic spectrum, stopping iron from reaching the brain of victims making them unconscious, and was capable of firing an EM Pulse. Joseph could maintain total control of an entire planets electromagnetic field and could manipulate it accordingly. Joseph could also use and absorb the powers of another mutant possessing the same powers as he did (i.e. Magneto, Polaris).

Joseph was intimately linked to the Earth's electromagnetic field. As it was effected, so was he. He knew instinctively all that happened to it. The Earth lent him strength by virtue of it's existence. This connection seemed to extend to others possessing similar powers such as Polaris & Magneto.

Joseph's ability to wield his superhuman powers effectively was dependent upon his physical condition. When severely injured, his body was unable to withstand the strain of manipulating great amounts of energy. When his powers were not at their peak, he also appeared to have greater difficulty controlling forces other than magnetism. As Magneto's clone, his powers should have also worked in the same manner that Magneto's did. He was said to have much greater raw power than Magneto, but far less control.

He also had a strong level of Telepathic Immunity, resisting to the Gamemaster's plans.[12]

Joseph could use his magnetic powers to increase his physical strength up through Class 100, the ability to lift over 100 tons.

Flight under his own power.

Like this? Let us know!
Retrieved from "https://marvel.fandom.com/wiki/Joseph_(Earth-616)?oldid=6016359"
Community content is available under CC-BY-SA unless otherwise noted.