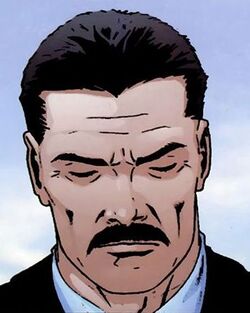 Joe Danvers was a former U.S. Navy officer and construction worker living in Boston, Massachusetts.[2] He was a widower with two boys, Joe, Jr. and Steve.[3]

When he was out fishing one day, Joe crossed paths with Mari-Ell, a captain of the Kree Army who landed in the water during a covert mission that took her to Earth. Mari-Ell fell for Joe's kindness and began a relationship with him, under the human disguise of Marie. Her love for Joe and her life on Earth eventually led Marie to reveal her true nature to him. Marie considered breaking off, but Joe convinced her to continue a life together. They married after Marie became pregnant with a child. When the baby was born, she was named Carol, adapted from the Kree named Car-Ell. Days later, Marie gave Joe the decision to turn off her tracker device, effectively severing her from the Kree Empire.[3]

The couple moved to Beverly, a suburban community to the north of Boston.[4] Joe grew apprehensive of potential retribution from the Kree against Marie for her desertion, causing him to become an abusive father and a heavy drinker. He particularly looked down on Carol, both for being half a human and a girl.[3] When he could only afford to send one of his kids to college, Joe chose his eldest son, Stevie.[5] Steve instead enlisted in the military and was killed in action during the Vietnam War. His devastated the family and Joe further drowned his feelings with alcohol.[6][7][8]

Years later, Carol had become the superhero Ms. Marvel. She came to visit her parents with her friend Michael Barnett.[2] Working in construction, Joe was attacked by Steeplejack. He was saved by Ms. Marvel, which he was embarrassed about. Marie saw through her daughter's disguise and asked her not to judge her father.[9] Carol later went back to live with her parents after her outburst as Warbird.[4]

The family eventually moved to their summer home in Bar Harbor, Maine where Joe was diagnosed with lung cancer and the disease spread so rapidly that he needed a respirator to breath. He tried chemotherapy; however, it didn't work since he had been diagnosed too late. Carol visited him during the final stages, looking to make peace with him, but he was unconscious.[8] He died not long afterwards.[10]

Like this? Let us know!
Retrieved from "https://marvel.fandom.com/wiki/Joseph_Danvers,_Sr._(Earth-616)?oldid=6007225"
Community content is available under CC-BY-SA unless otherwise noted.