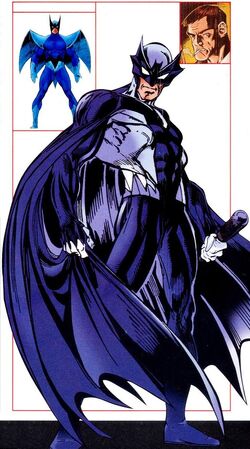 Joseph Manfredi was born in Orlando,Florida, and is the son of Silvio Manfredi, better known as the crime lord "Silvermane".[2]

Somewhere along the line he learned how to control Bats and make them do his biding, he was then approached by the Ringmaster and his Circus of Crime. They offered to let him join them in their life of given his talent to control Bats; Joseph accepted and became part of their team with his own costume and renaming himself "Blackwing".[3] While he was a member of the group, they battled against Daredevil and lost, while the others were captured, Blackwing escaped.[4]

Manfredi worked as an agent for Silvermane's Hydra, serving as the Air Action Division Leader, when his father was leader their.[5] He participated in the capture of Foggy Nelson, and battled Daredevil, Black Widow, Nick Fury, and S.H.I.E.L.D.[6] He was once again defeated by Daredevil.[7]

Manfredi later teamed up with Jack O'Lantern to stake out his father's house when the Red Skull took the control of the base, turning the mansion into his so-called "Skull-House".[8] The duo searched the Skull House and battled Captain America during this event. [9]

The Crimson Cowl recruited Blackwing to join her incarnation of the Masters of Evil. He was defeated alongside them.[13]

After that last defeat, Joseph abandoned the Blackwing identity and became a crime lord creating his own private villains in Heavy Mettle.He ordered Firestrike to bring him the Torpedo Armor of New Warriors member Turbo in hopes of proving himself to his father and the other crime bosses of New York. The New Warriors defeated Joseph's group and Firestrike is currently in the Witness Protection Program in exchange for his testimony against Joseph Manfredi.[14]

Like this? Let us know!
Retrieved from "https://marvel.fandom.com/wiki/Joseph_Manfredi_(Earth-616)?oldid=6442985"
Community content is available under CC-BY-SA unless otherwise noted.