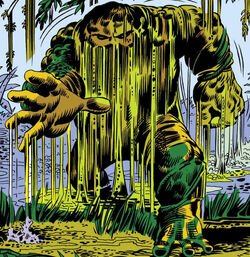 Hair
No Hair At All (Glob),
Brown (Timms)
Unusual Skin Color
Orange ; As the Glob, his skin resembles various colors and textures ranging from bark to mud.
Unusual Features
As Glob, his body is composed of a sterile, mud-like substance. He has no visible mouth, and tends to be covered in grassy or weed-like fibers.
Origin
Origin
Joseph Timms drowned in a swamp shortly after escaping from prison. The swamp effectively mummified his body, leaving it intact until the day a passing Hulk hurled a barrel of toxic waste into the swamp. The chemicals then mutated Timms' body into the Glob.
Reality
Earth-616
Place of Death
Timms died in an unnamed swamp before being mutated.
Creators and Appearances
Creators
Roy Thomas, Herb Trimpe
First Appearance
Incredible Hulk #121
(November, 1969)

Timms was a petty criminal serving time in an unspecified prison when he received a letter from telling him that his significant other was dying. Desperate to be with her one last time after his parole was denied, Timms escaped from prison, but died attempting to traverse the nearby swamp. His body remained there for several years.[1]

Later, a passing Hulk (Bruce Banner) threw a barrel of radioactive waste into the swamp. The waste mutated Timms' body into the powerful grotesquerie, the Glob. Wandering aimlessly, the Glob made his way onto a nearby resort There, the Glob saw Betty Ross, and in his confused state, mistook her for his lost love. When the Glob subsequently abducted Betty, the Hulk pursued and attacked. The Hulk was then surprised to find his fists could do no real damage to the monstrosity. As Glob took Betty into the swamp, the radioactive waters that spawned him melted him into nothingness, but he made an effort to protect Betty from harm, giving Hulk a chance to rescue her.[1]

Later, the Leader learned of Glob's existence, and reconstituted his body in a plan to strike out against the Hulk. The leader put the image of the Hulk attacking Betty in Glob's mind, causing him to go berserk. Glob rampaged across the country, finally reaching Los Angeles, where Banner was hiding out. After Glob attacked Banner in a sewer hideout, Banner transformed into the Hulk and battled the Glob back up to the surface. The battle soon reached a power plant, where the Hulk led Glob up a tower and electrocuted him. Glob fell, and upon impact, the whole building exploded, rending Glob into pieces.[2]

Glob's pieces began to reform by moving toward each other and joining through several weeks or months.[2] The Leader created a simulacrum of the Glob in an array of simulated super-villains he sent against the Hulk in a failed attempt to cause him a heart attack.[3]

The Glob's body couldn't sustain itself. Yagzan, leader of the Cult of Entropy, found Glob and determined that his entire body was dead, with only the brain still living (although it too was slowly dying). Yagzan removed the brain, placed it in an enclosure, and brought it back to health. He also infused a portion of himself into the brain, forming a mental link with it so that he could control it in the future. Yagzan dubbed it "the Golden Brain".[4]

Yagzan used the power of the brain to oppose the construction Omegaville energy project on behalf of his cult. However, the nearby Man-Thing sensed the anger of the men nearby, and was drawn into the conflict. A surprised Yagzan then used the brain's power to construct a golden-hued replica of Glob's body, which fought with Man-Thing, but was easily defeated. The exertion caused the Golden Brain to become so hot that Yagzan dropped it into the swamp. Freed, the Golden Brain tried to recall his lost memories. Still mostly amnesiac, the Golden Brain came back onto the land, and formed a new, human body for itself out of clay. 'Joe' as he now called himself later approached the Omegaville project, where he was hired as a worker. The cult later tracked the Glob down, and, horrified by his transformation back into a human form, Yagzan re-asserted his mental control to force Glob to devolve as much as possible. Now a mass of humanoid clay, Yagzan once again ordered Glob to destroy Omegaville. Again, the Glob was stopped by Man-Thing, who pummelled him into a shapeless mass of clay. Yagzan attempted to reform the creature, but he took advantage of his amorphous form and engulfed Yagzan completely before hardening back into his human form, suffocating him.[4]

Later, Bruce Banner encountered Glob's reconstituted form wandering the Everglades. However, the Collector attacked and used his powers to revert the Glob back into his previous form. After taking control of Glob and Man-Thing, the Collector used the two to capture the Hulk, collecting all three. Before long, however, the three broke free, and Glob stayed to take his revenge on the Collector while Hulk and Man-Thing took off. [5]

Glob was recruited into S.H.I.E.L.D.'s anti-monster, anti-supernatural taskforce, the Howling Commandos. He accompanied the Gorilla-Man, Groot, Warwolf, and others in their assault on Merlin's stronghold. He has been outfitted with an electronic voicebox, which allows him to communicate with the team.[6]

At some point, Glob was apprehended by S.H.I.E.L.D. and placed in Pleasant Hill.[7]

Glob possesses super strength of Class 100 level, with appropriately superhuman levels of stamina and endurance. Although his intelligence originally seemed to be significantly reduced from his human level, he seems now seems to have recovered a great deal of his mental faculties. He has demonstrated a limited ability to reconstitute his body after it has been dismembered, and he can survive being burned.

As the Golden Brain, Glob demonstrated several psionic abilities, such as the ability to form a psionic entity resembling his Glob body, and the ability to reconstitute a completely new body from clay. Glob's body is known to be completely sterile, and it is possible that, rather than Glob's body being dead just when Yagzan found it, Glob's body could always be "dead", animated solely by the power of the brain.

Glob is capable of 100 ton class feats of strength.

Like this? Let us know!
Retrieved from "https://marvel.fandom.com/wiki/Joseph_Timms_(Earth-616)?oldid=6467369"
Community content is available under CC-BY-SA unless otherwise noted.