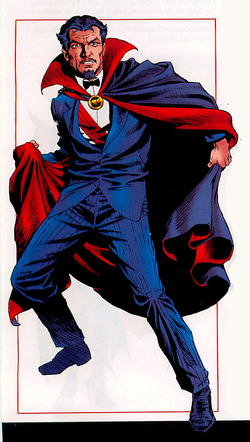 Hair
Black ; progressively Grey
Unusual Features
When possessed by the Darksoul, Joshua had a pentagram shaped birthmark on his chest. He eventually developed pointed ears and teeth.[2] However once the Darksoul was expunged from his system these physical features were reversed.[3]
Origin
Origin
Human
Reality
Earth-616
Place of Death
Somewhere in the Adirondack Mountains, upstate New York
Creators and Appearances
Creators
Stan Lee, Jack Kirby
First Appearance
Fantastic Four #3
(March, 1962)

The Miracle Man began his career as a cheap stage magician. He wasn't very good but he discovered he was subconsciously hypnotizing his audience into “seeing" him perform incredible tricks. One night he saw the then-new Fantastic Four sitting in the audience. He boasted his powers were greater than theirs and apparently proved it when he humiliated the Thing onstage. That night he decided it was time he used his powers to get rich as a super-criminal. With his hypnotic powers he made the people of New York believe that a publicity display for a movie called "The Monster From Mars" came to life and was rampaging through Manhattan. With the Fantastic Four busy with the "danger", the Miracle Man committed a series of daring robberies including the theft of an atomic tank. When the FF drew close, he captured the Invisible Girl and fled to a nearby junk yard in the hopes of using her as a hostage to keep her teammates away. The Four went after the Miracle Man, and he was easily defeated when the Human Torch used a high intensity flame blast to blind the Miracle Man, rendering him blind. Mr. Fantastic had discovered the nature of the Miracle Man's powers and explained it.[4] Soon afterward, Alicia Masters, a sculptor friend of the Fantastic Four, made a small statue of the Miracle Man for a series of statues of the Fantastic Four's main foes at that point.[5]

Ayers was found guilty of his crimes and imprisoned in a Midwestern penitentiary. When his vision eventually returned he became obsessed with the concept of "mind over mater" in the hopes of discovering a means of creating real miracles instead of merely illusions. He spent his time in prison reading all he could on the subject. In his research he learned of the ancient Cheemuzwa Tribe who were believed to live in Dark Hills region of Oklahoma. Upon his release, Joshua traveled to an old cave that was said to be their home. There he found the near immortal Cheemuzwa people, and managed to trick them into teaching him their secrets. He then used his new found powers to trap the Cheemuzwa people in the cave. He then traveled to the nearby Keewazi tribe. His attack on the tribe coincided with the arrival of tribesman Wyatt Wingfoot and his long time friends the Fantastic Four. The heroes easily destroyed Miracle Man's rock creatures, but they and the Keewazi people were then trapped underground by the Miracle Man.[6] With his foes temporarily out of the way, Miracle Man used his powers to create a massive city, unaware that the use of these powers was making all nuclear weapons and energy sources on Earth begin to go critical, threatening to annihilate the entire world. Also unaware of the danger the FF freed themselves and fought the Miracle Man again, forcing him to create an army of minions to fight them before ultimately sending them away. Ayers then attempted to create a race of slaves, including his ideal woman, but found they they feared and rejected him. The FF returned and battled him again, however just as the Earth was on the brink of destruction the spirits of the Cheemuzwa people appeared and teleported Miracle Man away, telling the heroes that they would attempt to cure his madness and teach him not to abuse his powers again.[7]

Ayers then feigned obedience to the Cheemuzwa people and lived in another dimension for a time, continuing to learn how to harness his new powers. Eventually, his keepers let their guard down and struck them down. He then returned to the Earth dimension with delusions of becoming a god. To this end he decided to recreate the Biblical tale of the birth of Jesus Christ. On Christmas Eve he used his powers to transfer his Cheemuzwa pursuers into the Three Wise Men, and converted the Keewazi reservation into a replica of Jerusalem complete with its own Star of Bethlehem and a baby Jesus. The Miracle Man believed that in creating an even more immaculate conception that he would ascend to godhood and rule over man. His plans attracted the attention of the Ghost Rider who was motorcycling through the area. The creation of the star also brought the attention of Fantastic Four leader Mr. Fantastic who sent the Thing to investigate. The interference of the two heroes prompted the Miracle Man to show himself and attack the two heroes. Ghost Rider's hellborn powers managed to keep Miracle Man at bay long enough for the Cheemuzwa to break free from his control and overpower him once more. Once again Miracle Man was teleported away, with the Cheemuzwa promising that he be imprisoned forever.[8]

The Power of Satan

Joshua was eventually returned to Earth and stricken with amnesia after the Cheemuzwa placed a "veil of ignorance" over his mind. He was drawn to a monastery in Massachusetts run by Father Raymond Gosset and began taking his vows to become a monk, taking up the name "Brother Joshua."[3] Not long after this, Daimon Hellstrom, the so-called "Son of Satan", came to the monastery seeking guidance from Gosset, an old colleague. While in proximity of Daimon's Darksoul, its influence caused the veil to lift restoring his memories while the monks were taking their vows. With is mind and powers back to normal, Miracle Man then battles with the Son of Satan, managing to steal Daimon's Darksoul as his own, vowing to use the power to reshape the world as he saw fit.[2]

When Daimon's teammates the Defenders came looking for him, Ayers used his Satanically augmented powers to try to hold them at bay initially. However he soon exerted some sort of control and seemed to genuinely wish to make the world a better place. He then teleported to the Defenders to the island of Java where the Miracle Man used his powers to revitalized the impoverished village of Rannglasbitung. However the Darksoul began exerting its influence once again and when a villager refused to let Ayers heal him, he grew angry and attempted to slay the village elder. This prompted the Defenders to attack but they proved no match for the Darksoul empowered Miracle Man. When all seemed lost, the Son of Satan appealed to the Darksoul, convincing it to return to him as it would have more power in a Satan-spawn such as himself instead of through a human. When the Darksoul left Ayers' body and attempted to possess Diamon again, it was caught in the middle of psi-blasts fired from both Hellcat and the Overmind disrupting the process and trapping the Darksoul in the body of a snake.[3] Joshua was restored to normal but found that being separated from the Darksoul not only stripped him of the Darksoul but he also lost his mind-over-matter abilities. With the loss of his powers, Joshua and the Defenders were shunted back to Massachusetts where a repentant Ayers begged Father Gosset to take him back into the fold. Believing that Ayers was genuine in his pleas, Gosset accepted and the Defenders left Ayers in the care of the monks.[9]

However, the Miracle Man was far from reformed, cutting ties with the monastery he sought to regain his lost powers. To this end he purchased a bus ticket to Project PEGASUS where he believed he could find something to restore his powers. As fate would have it, the Thing -- just recently estranged from the Fantastic Four -- happened to be riding the bus as well. Also aboard the bus was the super-villain murdering assassin known as the Scourge of the Underworld who was travelling on the bus disguised as a Hippy. Not wishing to be discovered, Ayers relied on his hypnotic techniques to cloud his presence from those aboard -- especially the Thing. When their bus passed a prisoner transport carrying the Rhino, he stopped both vehicles and freed the Rhino in the hopes of gaining his assistance in breaking into Project PEGASUS. However the Rhino intended to work with the authorities in the hopes they could remove his Rhino costume that was permanently fused to his body and was unwilling to assist the Miracle Man. Furious, Ayers then used his hypnotic powers to force the Rhino to ram the bus, still containing the Thing, off a cliff. When the Thing climbed back up, Miracle Man then set the Rhino and the other passengers against him. All except for Scourge, who managed to sneak up on Ayers and shoot him dead. With the Miracle Man slain, those under his control were released from his control. Scourge managed to escape while the Thing subdued the Rhino.[10]

A few years after his death, the Miracle Man was among a number of Scourge victims who were resurrected by The Hood and inducted into his super-villain gang for the sole purpose of killing the vigilante known as the Punisher.[11] The Hood convinced them that the Punisher was secretly Scourge and gave them 30 days to eliminate the vigilante or be returned to death. When Miracle Man attempted to use his hypnotic powers to get out of this task, the Hood then used his mystical powers to punish him. With the resurrected villains under his control the Hood provided them with upgrades that would help them in their tasks of bringing the Punisher down.[12] Miracle Man worked with the other resurrected villains to disguise themselves as the Avengers to attack the Punisher. However the Punisher quickly saw through this ruse as they took on the appearances of Avengers members that were part of the team around the time they were all murdered. The Punisher defeated these would be assassins, however the Miracle Man managed to slip away in the ensuing chaos.[13] While his allies were ultimately slain by the Punisher, Miracle Man survived.[14] He later filed a law suit against the Future Foundation after being assaulted by the She-Hulk.[15] the outcome of that case and Miracle Man's subsequent activities are unknown at this time.

Ordinarily, the Miracle Man possessed the normal human strength of a man his age, height, and build who engaged in little regular exercise. While possessing the powers taught him by the Cheemuzwa, the Miracle Man could increase his strength to superhuman levels, at least enough to match the strength of the Thing, who can lift (press) 85 tons.

Miracle Man's hypnotic powers apparently only worked upon making eye contact. As such blinding him would render him powerless.[4]

When endowed with his "mind-over-matter" abilities, these powers appeared to have an effect on his sanity.[8] In addition to this, the effects of his powers would be reversed when he was knocked unconscious.[7][8] Also while not a direct weakness to himself, the use of these powers also caused instability in atomic power sources which could cause a planet wide annihilation should the constant use of his power cause these atomic sources to reach critical mass.[7]

While possessing the Darksoul Joshua was susceptible to its influences.[3]

Apparently the spell that was used to resurrect the Miracle Man was apparently set to expire after 30 days, returning those under its power back to a state of death. While the Hood promised to make the spell permanent, he secretly had no intentions of doing so.[12] It remains to be seen if Miracle Man will continue to endure after this 30 day period elapses.

Retrieved from "https://marvel.fandom.com/wiki/Joshua_Ayers_(Earth-616)?oldid=5728825"
Community content is available under CC-BY-SA unless otherwise noted.