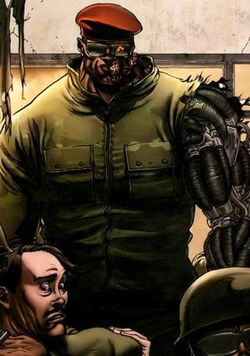 It's just a village in Africa. Everyone wants to save the world, you see. But nobody really cares about M'bangwi. No one but me.

Joshua N'Dingi is the son of Jonas N'Dingi, leader of the Gawan tribe, of the Mbangawi independence and King of Mbangawi.[2]

As a young man, Joshua was sent to England for an education. He became a member of R.C.X.. His job was to take the mutated children known as Warpies, to put them under the government care, alongside with his colleagues Matthew and Michael. As Matthew (later known as Gabriel) and Michael took care of the parents, Joshua was the one to deal with the children.[7]

He was among the agents who were worried about Nigel Orpington-Smythe's plans for the warpies.[8]

During a typical mission, he was hideously scarred when the Warpie baby, who he had to took in custody, exploded in his face.[4][7] The British government and the R.C.X. spent millions outfitting him with cybernetic parts. Officially, he was said he had been burned during a car accident.[1]

He returned to Africa to inherit his late father's throne as the ruler of Mbangawi, even with his colleagues begging him to stay.[citation needed] He had sometimes to leave his country for medical maintenance.[1]

Adored more as a God, despite his simple King title, he preferred being called President,[6] being uncomfortable regarding his people idolatry.[2]

Since he got on the throne, things gone better as for justice, health or education.[1] In order to put an end to the two difficulties encountered by his father, the corruption and the tribes' rivalry, he recruited, despite his tribe's elders advice, Kura, the Witch Woman of the J'Dare tribe, as his confidante and adviser, and used her mental powers to found and rout out the corruption from Mbangawi.

He has since established (or maintained) amicable relationship and common efforts with such country as Kenya, Tanzania, or Wakanda, working alongside King T'Challa. He is known to be a close friend of Zanzibar President Jono Baraka.[2]

Seeking to bring justice to the region, he had his men capture slave trader Jamie Braddock, while he was present on Mbangawi soil during a trans-African rally. Meanwhile the Mbangawian authorities pretended to give the rescue teams full cooperation in the researches;[9] tricked by his old R.C.X. colleagues into believing Jamie's brother, Brian, aka Captain Britain, was complicit in Jamie's crimes, Joshua lured Captain Britain to Mbangawi for punishment. However, upon Joshua learning Captain Britain was innocent, he let him go; in turn, having learned of Jamie's crimes, Brian left him to Doc Croc's punishment.[10]

Sat Yr-Nin subsequently hired the Technet to free Jamie,[3] who was turned crazier under the torture of N'Dingi and Kura. Using his gas, he convince Gatecrasher of the evilness of the Technet target. Yap accidentally brought both Braddock and N'Dingi back to the UK too, where Jamie defeated the whole Technet and turned the Doctor Croc into a genuine, but small, crocodile.[11]

Joshua was later found and turned back to normal by his Witch Woman.[2]

Joshua represented Mbangawi in the Pan-African Congress on the Treatment of Superhumans, hosted in Wakanda in search of a consensus on how to react to the American Superhuman Registration Act. The representatives failed to reach an agreement before the Congress disbanded.[5]

When Warpies began being born in Mbangawi, Joshua had leaves to perform a medical maintenance of his state, resulting in a less robotic face, but he had soon his soldiers isolating them at his return, taking Mutantes Sans Frontières' doctors as hostage and bringing him into conflict with the X-Men after having ordered his men to sent home the mutants and to execute the children.[12]

They quickly fight at their side against the Furies who were tracking down a new and lost Jim Jaspers with trans-reality transportation powers linked to Jaspers' warps.[12] When the fight finally ended, with the Furies dead or gone, N'Dingi visited the asleep Jim Jaspers and shoot him before any X-Men could react, to prevent him to to warp again and provoked more Warpies' birth again. He then leaves, blaming the X-Men for the paternalism and the hypocrisies of the developed countries and claiming to be the only one who really cares about his country and people.[6]

Using his cyborg body, he has access to a powerful arsenal.

As a former government agent, Doctor Crocodile is a trained hand-to-hand fighter.[citation needed]

His robot arm can spray a hallucinogenic green gas that makes its victims experience full-sensory illusions.[citation needed] Doctor Crocodile can direct these illusions to gain information or the measure a person's true character.[citation needed] This arm is also providing many weapons for close and long range, strong enough to destroy a reformed bigger Fury.[citation needed]

Like this? Let us know!
Retrieved from "https://marvel.fandom.com/wiki/Joshua_N%27Dingi_(Earth-616)?oldid=6127489"
Community content is available under CC-BY-SA unless otherwise noted.