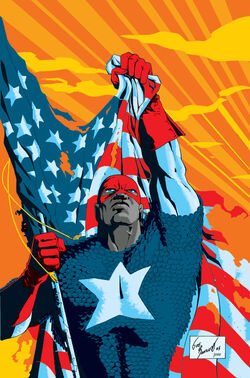 After losing the secrets of the Super Soldier Serum when Dr. Erskine died from Nazi assassination, the United States Army still wanted to produce more like Steve Rogers aka Captain America.[2] To this end, Col. Walker Price and Dr. Wilfred Nagel took 300 African-American soldiers from Mississippi to experiment upon with variants of the serum. Only a handful of men survived the gruesome process, and only one of them survived the covert missions and assignments: Isaiah Bradley.[3]

Bradley's last mission was to destroy the German Super Soldier formula research and a Nazi death camp in Schwarzebitte, Germany. Before leaving on the mission, Isaiah took a Captain America costume and shield with him. He was successful, but was also captured. Luckily, Isaiah was rescued by a group of German freedom fighters. Months after Isaiah was rescued from Germany, he was able to finally return home where he was court-martialed and given life in prison for stealing the Captain America's costume. Starting in 1943, Isaiah served seventeen years in solitary confinement. There his body and mind slowly deteriorate due to unforeseen side effects of the Super Solder Serum. He was only released because his wife Faith wrote President Eisenhower a letter every month for three years. In 1960, on the day of Kennedy inauguration, Bradley was granted a full pardon and swore to secrecy.[4]

During Bradley's imprisonment, the U.S. military began experiments to duplicate his powers and create more Super Soldiers. To this end, they harvested blood from Isaiah Bradley (before the Super Soldier Serum made him super durable) to create a child who would be as receptive to the Super Soldier process as Isaiah Bradley was. Thirty-eight failed attempts occurred before the child named Josiah was finally carried to term. A young African-American girl matching Faith's blood type served as surrogate mother, but when she discovered the truth about what the child would be used for, she escaped with Josiah and found Faith Bradley. Faith publicly told the girl she was stupid, that their house was watched, and with Sarah Gail's doll in the basket she sent the girl out, screaming for her to run. Then, late at night Faith and Sarah Gail snuck out of the house and put the infant on a train. Sarah Gail left a note on her brother's blanket, "My name is Josiah."[1]

Josiah grew up in a Catholic orphanage outside of Boston during the early years of his life. Here he felt hopeless and abandoned by the God he was taught to worship. When Josiah's powers manifested, he shoved Sister Irenia and accidentally knocked her unconscious. Fearing he had killed her, he fled. Not long after, Josiah lied about his age, and under the assumed name of Josiah Smith he enlisted into the U.S. Army during the Vietnam War.[1]

Josiah served several tours in Vietnam, becoming a seasoned and experience veteran. His combat unit, made up of primarily black soldiers, was nearly killed on a mission by an inconsiderate and racist officer's order to bomb the area while they were still on patrol. He punched the officer and was court martialed, and sent back to the States to be held in military prison.[1]

While imprisoned, tests suggested Josiah may be the missing Super Soldier baby. Agreeing to what he was told would be minor tests in exchange for his freedom, Josiah willfully allowed his transfer from detainment in Fort Leavenworth, Kansas to a secret research facility in Berkeley, California. It was here that blood tests proved he was the missing child and the only known subject that had survived. His surrogate mother, brought in to confirm a genetic match, again helped him escape and told him what she knew about his past, the first names of his genetic parents.[1]

Four years later, while Josiah was involved with the radical Black Panther Party movement, he learned of the Super Soldier experiments on black enlisted men in WWII, and found the names of his parents. Mount Vernon, Virginia, Josiah returned to the Bradley home and met his mother, sister and childlike father. Unable to stay long for fear of being discovered, Faith told Josiah to return when it was time. Faith told him to leave promptly, as they were always being watched, so he left, and waited for a signal to return.[1]

For a time Josiah lived as a mercenary and killed for profit. Eventually, Josiah discovered the Islamic faith and found his purpose in it. He completed the hajj, the traditional Muslim pilgrimage to Mecca. Upon returning to the States, Josiah made his way to Boton to confess the murder of Sister Irenia. To his surprise, she was still alive and healthy,[1] and the two began a deep and meaningful friendship. Upon her retirement, Irenia came to live with Josiah as his housekeeper and mentor.[5]

Josiah became a Muslim minister, and opened a mosque in Little Mogadishu ("The Mog") in Brooklyn. Josiah became involved with James "Rhodey" Rhodes after Rhodey's sister died under mysterious circumstances.[6] Eventually, Josiah came to join Rhodey's "Crew" to bring down the drug-dealing, crime-lord, Triage and his 66 Bridge Gang. As Justice and armed with his father's shield, Josiah determined to no longer turn a blind eye to the criminal activities in his community.

Josiah continued to visit his father and the Bradley family after they moved back to the Bronx, Josiah came to visit periodically to spend time with the family he never had.[1] Some time later it was revealed that Josiah had stopped visiting, and had not been seen by the family in over a year.[7]

Justice has powers similar to his father and his nephew. During his creation his genetic code was monitored with great precision, and manipulated to compensate for the side effects of the unrefined Super Soldier Serum. These powers include:

In the course of his many years, Justice has had experience and training as a soldier, a radical activist and as a mercenary. He has learned a variety of martial arts styles, foreign languages and weapons training.[9]

Like this? Let us know!
Retrieved from "https://marvel.fandom.com/wiki/Josiah_al_hajj_Saddiq_(Earth-616)?oldid=6135681"
Community content is available under CC-BY-SA unless otherwise noted.