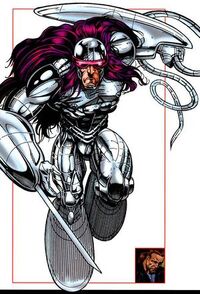 Joss Shappe was a lowlife criminal even before he got his super-powers as Speedfreak. At some point in his life, Speedfreek became addicted to a drug called "snap". He killed the owner and supposed inventor of his battlesuit in order to steal it. Once Speedfreek's daughter, Kate, discovered what her father was doing for a living, she ran away from home.[1] Later, he was hired by a man called only Mr. Lang and had to kill his rival Ralph Baldone. Speedfreek successfully completed that job, additionally killing the man's guards. Lang later hired Speedfreek to kill the man who had infected his son, Tyler, with AIDS. Speedfreek located Tyler and his partner at a musical performance during an AIDS benefit party. During the battle he injured both Rick Jones and Jim Wilson. Bruce Banner, aka the Hulk was also present. The Hulk ended the battling by throwing Speedfreek a very long distance.[2]

Speedfreek's image was used in one of the illusions created by Mentallo.[3]

Speedreek, disguised as a civilian, visited the home of Bruce Banner. Speedfreek wanted the Hulk to find Larry Richards, the man responsible for murdering his daughter. The Hulk goes to Reverend Richards' church and speaks with Larry. Larry confessed that the entire affair was an accident and that he never intended on hurting anyone. The guilt that had been consuming him is the reason he attempted suicide. Speedfreek enters the church and tries to kill Larry. The Hulk and Speedfreek fight one another, and Speedfreek succeeds in tearing open the Hulk's stomach with his adamantium blades. Speedfreek runs off to finish his work, but the Hulk catches up to him and hurls a car battery at him. The battery acid splashes across Speedfreek, burning his exposed flesh. Screaming in pain, Speedfreek takes off. Larry is grateful to the Hulk and asks how he can repay him. The Hulk, feeling very little sympathy at this moment, tells him to go to Hell.[1]

Speedfreek was also one of the villains that escaped from The Raft.[4] Hiding in Stamford with some other escaped convicts, he was eventually tracked down by the New Warriors, who battled with him and his friends as part of a reality show. Nitro used his powers to destroy the entire neighborhood, causing both the death of hundreds of people, the New Warriors, and presumably Speedfreek as well.[5]