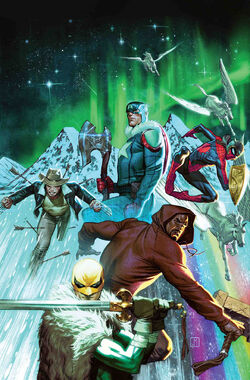 The Jotunheim Strikeforce was a team of heroes assembled by Captain America during the War of the Realms to rescue Thor, who had been left stranded in Jotunheim by Malekith, on behalf of Freyja.[1]

The heroes reached Jotunheim using the newly-reactivated Bifrost, but their flying steeds save for Arctorius were all killed by Frost Giant archers. They continued on foot, following a trail of Frost Giant blood to Thor, who had become submerged in warrior's madness. The Strikeforce fought the near-endless swarm of Frost Giants alongside Thor for hours, costing Arctorius' life, until the monsters were all defeated, causing Thor to snap out of his rage. Afterwards, they returned to Midgard.[2]

Retrieved from "https://marvel.fandom.com/wiki/Jotunheim_Strikeforce_(Earth-616)?oldid=5872703"
Community content is available under CC-BY-SA unless otherwise noted.