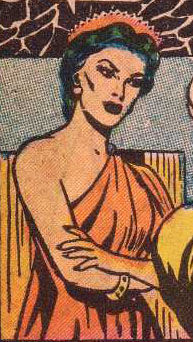 Joya is a member of the Olympian pantheon of gods and is the daughter of Zeus. In 1949, she grew jealous of the love goddess Venus being able to find mortal love on Earth. She then petitioned her father, claiming that Venus had forsaken her godhood for the love of a mortal. Zeus, weary of his demanding daughter agreed to allow a trial, and both Venus and her mortal lover Whitney Hammond were brought to Olympus. Meeting Hammond in person, Joya found herself interested in stealing him away from Venus and pressured Zeus and a council of the gods to allow her to return to Earth with Hammond to undo the "damage" done by Venus. However, the trial was abruptly ended when the Asgardian trickster god Loki attempted to invade Olympus. Seeing that her trial imperiled her home, Joya then disguised herself as Venus and offered to be Loki's queen. Loki agreed and returned to Hades where Zeus had previously banished him.[1]

Joya has not been seen since, clearly Loki eventually saw through her ruse as he has seen Venus since, Joya's fate is unknown.

Joya possesses various superhuman attributes, some of which are quite common among the Olympians, including:


In addition to these powers, Joya was also able to cast illusions to make her appear as others wished to see her. She used such power to pose as Venus.

Like this? Let us know!
Retrieved from "https://marvel.fandom.com/wiki/Joya_(Earth-616)?oldid=4868862"
Community content is available under CC-BY-SA unless otherwise noted.