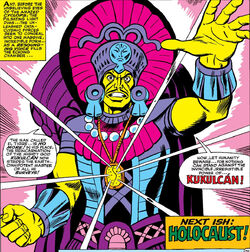 Juan Meroz, also known as El Tigre, was a hunter of ancient treasures. Escorted by two mercenaries, Ramon and Tuloc, he eventually found the Mayan pyramid of the god Kukulcan in Santo Rico.[citation needed]

When the Savage Land native Maa-Gor was transformed into the Man-God, he took El Tigre as his servant. Meroz was exposed to the same mists that had changed Maa-Gor, but he was unable to bear his transformation and threw himself over a cliff[1].

Telekinesis, Telepathy, and a limited form of Precognition that he called the sixth sense of danger (using a fragment of the Amulet of the Power).

He used a strange energy capable to melting rock after he was mutated by the Mystic Mists of the Savage Land.

El Tigre also used bolas and a knife as weapons.

Like this? Let us know!
Retrieved from "https://marvel.fandom.com/wiki/Juan_Meroz_(Earth-616)?oldid=5328867"
Community content is available under CC-BY-SA unless otherwise noted.