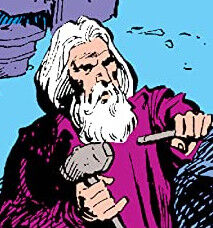 The Legend of the Golem

He became a leading rabbi in Prague, and created the monstrous golem, a statue of clay that came to life and protected Prague's Jewish community from harm.[1]

In 1939, the Jewish communities fleeing Adolf Hitler's "protectorate" over Czechoslovakian lands and settling in Morvania brought their traditions and folktales with them, including the Legend of the Golem, whom they adapted to Morvania, adding that the Golem was also the creator of the Imperial Amulet (which represented the symbol of the kingdom's ruler).[1]

Like this? Let us know!
Retrieved from "https://marvel.fandom.com/wiki/Judah_Loew_ben_Bezalel_(Earth-616)?oldid=6076005"
Community content is available under CC-BY-SA unless otherwise noted.