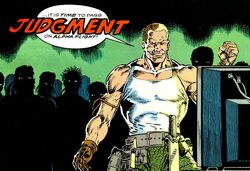 The members of this milita believed the public perception that there was a "new and deadly strain of super-virus" and blamed Alpha Flight for exposing the public to it through the treatment of Manikin at Bethune Memorial Hospital. They felt it their duty to pass judgement on Canada's team of adventurers. The team staged a military strike on Department H Headquarters once they had confirmed Alpha Flight had departed. Under cover of a pizza delivery, they took out security personnel, making their way to the medical lab where Manikin's cocoon was stored. When they attempted to kill Manikin, they were assaulted by Wyre, who managed to disable or kill all of them; though Manikin was injured in the process.[1]

Retrieved from "https://marvel.fandom.com/wiki/Judgement_Militia_(Earth-616)?oldid=5548236"
Community content is available under CC-BY-SA unless otherwise noted.