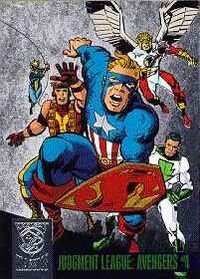 Base of Operations
Avengers Watchtower
Affiliations

Goliath and Myx joined the team shortly thereafter[3], though Myx only stayed until the end of the issue, leaving after realizing his intolerance of superheroes. Sometime later [4], Captain Marvel also joined the team, and Iron Lantern may have left the team during that period of time. The team discovered and thawed out the frozen body of Super-Soldier, who promptly joined the JLA.[5]

Apollo, Firebird, Mercury, Runaway, Wraith, and Nightcreeper were all metamutants, also called mutants, who became the newest members of the JLA.[6] The metamutants and non-metamutants eventually discovered that their views on certain things varied, and their relationships were tested when Will Magnus framed the Mariner, who was also a metamutant, for the destruction of a number of Roxxon oil tankers. The Mariner goes on the run, and when S.H.I.E.L.D. failed to capture him, the JLA was asked to capture him. They succeeded, and this was the last straw for the New Blood members of the JLA.

With the assistance of the mysterious Mister X, the New Blood freed the Mariner from where he was being held. Taking the name of JLX, the New Blood members and the Mariner fought an epic battle against the current members of the Judgement League Avengers, which at the time consisted of Super-Soldier, Dark Claw, Captain Marvel, Angelhawk, Goliath, Canary, and Hawkeye. The battle was stopped when Angelhawk faked an injury, as Angelhawk himself was secretly a metamutant. Angelhawk later ended up joining the JLX.[7]

Retrieved from "https://marvel.fandom.com/wiki/Judgment_League_Avengers_(Earth-9602)?oldid=5548237"
Community content is available under CC-BY-SA unless otherwise noted.