Dr. Danger and the Invisible Gunman terrorized River Bend. Even Kid Colt was outdrawn by the Gunman, as he could not see his hands drawing for his pistol. Colt was shot in the shoulder, but managed to escape. Colt soon found a newspaper article about a ventriloquist who had recently been released from prison who perfectly fit the description of Dr. Danger. Colt was then successful at exposing Danger as a fraud and sent him to prison.[1]

Dr. Danger was sent to State Prison where he was put on a chain gang with fellow criminals Scorpion and Bull Barton. Around this same time, Kid Colt himself had been duped into allowing himself to be arrested, and was sent to State Prison as well. His three old enemies took the opportunity to ambush him, and when the guards came to investigate the commotion, Danger tripped one of them with his ball and chain, stole his gun, and freed himself and his allies. The Chain Gang then crossed the border and went to a bar, where they encountered and robbed the bounty hunter who had tricked Colt in the first place. Kid Colt was also able to get free and tracked down the criminals, returning the three men to prison.[2] 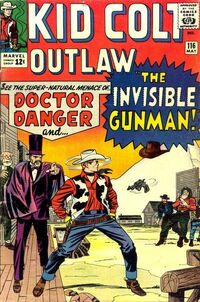 After somehow again freeing himself from prison, Dr. Danger accepted Iron Mask's offer to join him, Bennington Brown and the Fat Man in forming the Circus of Crime. The foursome intended on robbing the attendants of the inauguration party for the new governor of Arizona. Kid Colt also showed up in Phoenix at the same time, hoping to acquire a pardon from the new governor for his supposed crimes. The townspeople recognized Colt as an outlaw and were thankful to the circus for defeating him and sending him to jail. This won them the right to perform at the inauguration party itself, where, after a brief performance, the four men proceeded to rob all of the party's wealthy guests. Colt was successful, however, in again breaking out of jail and managed to capture all four of his enemies.[3]

Later, Dr. Danger again partnered with the Iron Mask and a host of other old west criminals including, the Fat Man, Hurricane, the Rattler, and Red Raven. They formed a veritable army of criminals based on the legends of the assault of Castle Kang. The Avengers West Coast had been sent back to this era by the actions of Dominus, and they joined forces with the western heroes of that time. Confronting Two-Gun Kid and Hawkeye alongside Fat Man, Dr. Danger used his magnet to pull Hawkeye's arrows and Two-Gun's revolvers towards him. Hawkeye, however, tricked him into doing so with a knock-out gas arrow, which disabled both Danger and Fat Man.[4]