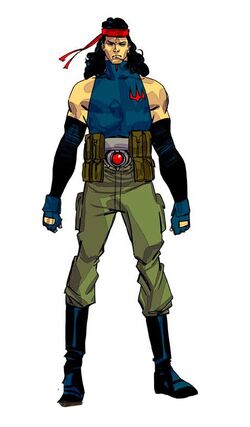 After the fall of Cameron Hodge, Rictor stayed behind on Genosha to help rebuild the nation. After some years of peace, the island and it's residents became afflicted with a mutant plague and they began a riot in the city over a food shortage.

Rictor was called in with the other Press Gang members to help quell the situation. They got the problem under control with the help of Mystique when she pretended to be Professor X.

When Baron Grey refused to lift the quarantine on the island, Rictor went along with Havok's plan to travel to X-Topia so they could kidnap the healer Triage and Rogue. When they entered their airspace, Rictor jumped out of the Quinjet with his team and ambushed the X-Men during a baseball game.[1]

During the battle and the loss of Magistrate Anderson, Rictor kept up on the attack while teammate Karma began to possess the minds of some of the X-Men to help them escape. Finally getting the upper-hand the Press Gang got ahold of Triage, Rogue and Tempus and used her temporal abilities to get away back to Genosha.[2]

Rictor took on the job of watching the prisoners but soon enough the X-Men came to Hammer Bay to mount a rescue attempt. As the brawl took place above ground Rictor was approached with his own opponent, Longshot. He blasted a vibrational shock at the ground causing an earthquake, but Longshot flipped over the rummage and threw some paralytic tipped blades at Rictor which rendered him unconscious.[3]

Rictor woke up to the horror of seeing a revived Hodge getting ready to kill Bombshell. He began vibrating the debris around Hodge ripping a hole in the ground but Hodge extended out his multiple tentacles to keep himself afloat. As Bombshell yelled to Rictor, it jogged Hodge's memory of Ric dropping a building on him. He returned the favor by stabbing Rictor in the head with his tendril killing him.[4]

Seemingly those of the Julio Richter of Earth-616.

Seemingly those of the Julio Richter of Earth-616.

Like this? Let us know!
Retrieved from "https://marvel.fandom.com/wiki/Julio_Richter_(Earth-24201)?oldid=5672166"
Community content is available under CC-BY-SA unless otherwise noted.