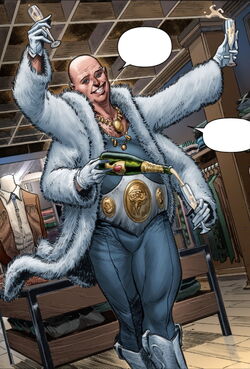 Jumbo Carnation was a mutant fashion guru and flamboyant young club entrepreneur based out of Mutant Town in New York City. He gained notoriety in and out of the mutant community, and appeared on some television talk shows. He designed clothing specially geared towards mutants and sold through the X-Factory Store, such as shirts with more than two sleeves, tentacle stockings, and wing gloves.[1][2]

One night after leaving a nightclub alone, Jumbo Carnation was attacked on the street by a group of humans. The attackers shoved paper in Jumbo Carnation's mouth, attempting to choke him. Either when the attack happened or shortly after, an explosion occurred inside Jumbo, cooking his internal organs and killing him instantly.[1] After investigating with the NYPD, Beast concluded that Jumbo Carnation actually died from a self-administered overdose of Kick.[5] However, the official cause of his death remains unclear.[6]

After Jumbo Carnation's death and discovering that he was adopted, Quentin Quire began to question Xavier's dream of peaceful coexistence between humans and mutants. Not knowing the true cause of Jumbo Carnation's death, Quire began using Kick and speaking openly about mutant supremacy. Quire later organized a militant group of like minded students called the Omega Gang.[7] Under the influence of Quire and Kick, the Omega Gang murdered humans, fought the X-Men, and incited a riot at the Xavier Institute during which fellow student, Dummy, died.[8] To stop Quire, Sophie Cuckoo used Kick to boost her telepathic powers so she could operate Cerebra. With the help of her sisters, Sophie stopped Quire and quieted the panicking mobs; however, she died either from mental strain or from an overdose of Kick.[5]

Using her sway on the Quiet Council, the White Queen ensured that Jumbo Carnation and other important mutants were among the first mutants to be resurrected.[3]

Jumbo Carnation is a mutant.[1] His known powers include:

Like this? Let us know!
Retrieved from "https://marvel.fandom.com/wiki/Jumbo_Carnation_(Earth-616)?oldid=6077491"
Community content is available under CC-BY-SA unless otherwise noted.