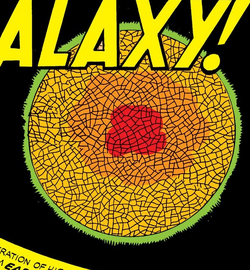 Jupiter is the fifth planet from the Sun and the largest planet within the solar system. It is two and a half times as massive as all of the other planets in our solar system combined.

The Jovians were a nomadic race that found themselves on the planet Jupiter and sustained themselves with the so-called "Pool of Madness". When rays from the pool began effecting the Earth in 1948, the United States government sent the Human Torch to destroy its source. This led to a conflict with the Jovians which ended with the apparent extinction of their race.[1]

On Earth-13133, the planet Jupiter (now called Planet X) was terraformed into an Earth-like world[2] and populated solely with mutants taken from Earth[3] after the Apocalypse Twins tricked the Celestials into destroying Earth.[4][5]

On Earth-691, the planet Jupiter became an Earth colony, home to a race of biologically engineered humans named the Jovians who were designed to withstand Jupiter's massive gravity and survive in its atmosphere.[6] The most well known Jovian human is Charlie-27 of the Guardians of the Galaxy. Other realities where humans living on Jupiter include Earth-669116[7] and Earth-9812.[8]

In the year 2061, Jupiter is inhabited by humans, and crime is supposed to be treated more lightly than on Earth, as Jupiter has a fame of having the best prisons. Prisoners are hypnotized into thinking they are planning their escape while they are actually kept in their cells for the rest of their lives.[9]

Like this? Let us know!
Retrieved from "https://marvel.fandom.com/wiki/Jupiter_(Planet)?oldid=6381476"
Community content is available under CC-BY-SA unless otherwise noted.