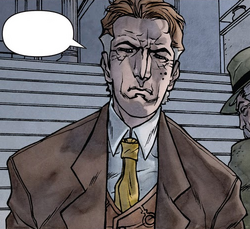 Jurgen Scharf was a Bavarian major during World War I. In the summer of 1916, Scharf was pulled to the safety of a nearby trench under heavy enemy fire by Jakob Eisenhardt, the future father of Magneto. For this, Jakob received a commendation for bravery and the undying gratitude of this superiors. Months later, Major Scharf pinned the Iron Cross to Jakob's lapel, and he was proclaimed a proud son of Germany.[1]

When the Nazis established the Nuremberg Laws, Jakob approached Scharf in his office, hoping he would protect him from the Nazis' oppression. However, a group of Nazis beat Jakob for "making such a trouble" in Scharf's office and resisting arrest. After hours of beating, Major Scharf threw Jakob out of his office, stating that they would have killed him and that they were even.[2]

Like this? Let us know!
Retrieved from "https://marvel.fandom.com/wiki/Jurgen_Scharf_(Earth-616)?oldid=5890431"
Community content is available under CC-BY-SA unless otherwise noted.