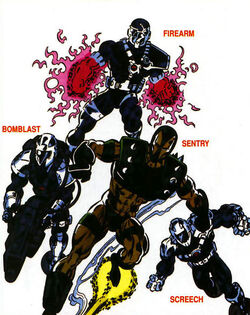 During a Vault breakout, Orwell Taylor's son Hugh was killed by Venom. The Vault itself was heavily damaged by the U-Foes several years later.[citation needed]

Taylor and his other son Max decided to seek revenge. A number of other disgruntled Guardsmen joined them as the Jury. They sought to 'try' villains, starting with Venom but he escaped due to the intervention of Roland Treece. Later the Jury kidnapped Spider-Man and tried him for bringing the Venom symbiote to earth. Again the Jury was defeated.[citation needed]

Later Orwell began to work with the Life Foundation and the Jury became more or less flunkies.[citation needed]

After parting ways with Orwell his eldest son Max, aka Screech, reformed the Jury and tried to make it more representative of an American court of law. Max chose to give up his Screech costume and become the Jury's defense attorney. A mysterious man known as Gavel was the judge for the Jury's trials. Olivia Lentz, a mysterious woman with a history in dealing with symbiotes was the prosecutor. To replace Screech the team recruited former Guardsman Jenny Stewart whose husband was murdered by the second Tarantula during a prison riot. Jenny was given the codename Wysper. She killed Tarantula in a deathmatch and was officially made a member.[citation needed]

Sometime later the Jury lost their support staff and funding. They were later hired by industrialist Edwin Cord, a recurring enemy of Iron Man's. US Agent was hired to be the team's field leader.[citation needed]

After learning that Abner Jenkins had been arrested, Cord decided to apprehend the Thunderbolts. They were unsuccessful. The Jury was later prohibited from attacking Graviton after his destruction of the Redeemers. The Jury and the Thunderbolts reluctantly ended up working together to defeat the Secret Empire.[citation needed]

The Jury wear specially modified version of the Guardsman Armor, with each member having a specific weapon or function.

Like this? Let us know!
Retrieved from "https://marvel.fandom.com/wiki/Jury_(Earth-616)?oldid=5839857"
Community content is available under CC-BY-SA unless otherwise noted.