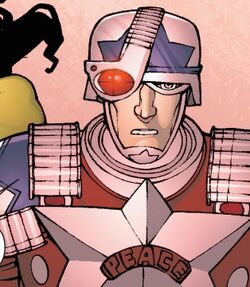 Break no laws and you shall have Peace no more!

Justice Peace is an agent of the Time Variance Authority.[1][2] He hailed from the possible future of Earth-869371, and originally worked for the Special Services of the Federal Police. He lived in the largest city state in North America known as Brooklynopolis.[1]

In Justice Peace's world, World War VII came to pass following the assassination of the Mayor of Brooklynopolis at the hands of a diplomat possessed by the entity known as Zaniac. While Special Services found Zaniac's activities to trace far back in time, they only managed to pinpoint his whereabouts in modern day. The Time Variance Authority agreed to send one of the agents of the Special Services to this time period to capture Zaniac, and Justice Peace was chosen for this mission. Justice Peace's Hopsikle was energized with a temporal displacement charge that allowed him to stay in the past for twenty-four hours.[1]

When he arrived in the past, Justice Peace could not help his instincts and forcibly stopped some jaywalkers from breaking the law. Thor intervened, believing Peace was attacking them.[3] Their struggle prevented Peace from saving Ruby Mortensen from being killed by Zaniac, who had possessed the body of Brad Wolfe and then transferred to a new host named Thug Thatcher.

Peace arrived at the crime scene which again caused a conflict with Thor. Peace explained his mission to the God of Thunder, who realized Zaniac's next target would be Jane Foster, whom Thug Thatcher had sworn vengeance upon. The two flew to Foster's house but were too late to stop Zaniac from murdering her. Thor used the residual energies of a time-travelling enchantment once present in his hammer Mjolnir to recharge Peace's Hopsikle, sending both of them back a couple of hours. Together, Thor and Jusice Peace managed to kill the vermins that carried Zaniac's essence before they could possess Thatcher. With his mission complete, Peace returned to his own time.[4]

Having been recruited into the Time Variance Authority, Justice Peace was sent by Mobius M. Mobius with a unit of Minutemen to stop Mr. Fantastic and Doctor Doom from using the Null Time Sequencer. He blasted Doom, seemingly destroying him, and then convinced the Fantastic Four to appear before the Committee on Time Lapses and Synchronicity.[5]

The Fantastic Four and Justice Peace travelled to Null-Time Zone, where the team was brought to the Committee. Peace watched the hearing and had to pursue the Fantastic Four when they escaped afterwards.[6] Peace confronted the team when Richard was preparing to introduce a virus into the TVA's computer systems to destroy all records of their timeline. The virus caused the TVA's timeline to split and create multiple time fragments and duplicates of the Fantastic Four, preventing Peace from knowing which Reed Richards to capture. Justice Peace eventually caught up with the Fantastic Four when they were escaping aboard Casey's Illinois Central Cannonball Express, a train capable of travelling through time and return them to Earth. After taking down the Human Torch and The Thing, Justice Peace was subdued by the Invisible Woman.

Justice Peace was kept on board the train since Mr. Fantastic's virus manifested in the form of a temporal shockwave that rewrote the fabric of the Null-Time Zone's reality to erase their records on the Fantastic Four's timeline, and if it caught up with the train they would cease to exist. Justice Peace took this chance to return to his own timeline, admitting that he had become bored of the TVA's bureaucracy and lack of action. When Peace's era flashed past the vehicle, he bid the Fantastic Four farewell and jumped off the train.[2]

Having returned to the ranks of the TVA, Justice Peace was sent to Earth-7484 to bring in Godwulf for his failure to apprehend the criminal Timestream. Peace and a squadron of TVA agent appeared before Godwulf, Deathlok and Siege to arrest them. The prisoners were about to be terminanted, but managed to escape. Godwulf convinced Peace to give them twenty-four hours to find Timestream. Peace revealed that Timestream's alteration of the timelines was an excuse for the TVA to permanently delete those realities. Peace wanted to help but was afraid his own timeline would be deleted. They defeated Timestream and Justice Peace arrived and told them that their mission was a success and personally escorted them back to their native timelines.[7]

Justice Peace and his partner Justice Love under orders from TVA came to the past to bring She-Hulk to the Null-Time Zone. They worked with the law firm GLK&H during their defense of Charles Czarkowski. However, one of the jurors pulled from the past was Hawkeye, who was dead in the present. In an attempted to save his life, She-Hulk tried to pass a letter to him, but she was arrested by Peace and Love for her interference. During the trial, Clockwise infiltrated the Null-Time Zone. She-Hulk was able to stop Clockwise, and Southpaw successfully argued for She-Hulk's innocence.[8]

Marksman: Peace is a skilled marksman wielding his sidearm, the Peacemaker.[9]

Pilot: Justice Peace is capable to operate multiple types of vehicles from his personal Hopsikle to TVA time ships.[9]

Force Field: Peace possesses a force-field that protects him using an energy-enhanced union skin, which allows him to withstand a punch from Thor.[9]

Peacekeeper Helmets:' The Special Services helmet in Peace's possession can analyze if a suspect is telling the truth.[9]

Peacemaker: A weapon that can fire a number different types of ammunition from explosives to DNA re-writing technology.[9]

Hopsikle: It can also be used to travel through time when energized with a temporal displacement charge. When the charge runs out it will return to his point of origin.[1]

TVA Time Ship: Justice Peace has operated one to the TVA's timeships.[6]

Like this? Let us know!
Retrieved from "https://marvel.fandom.com/wiki/Justice_Peace_(Earth-869371)?oldid=6449756"
Community content is available under CC-BY-SA unless otherwise noted.