He was the CEO of Hammer Multinational after inheriting his family's fortune and company. Fury and others couldn't understand why they should put their money and faith on a "punk" kid.[citation needed]

Hammer is so very arrogant, wanting to best Iron Man by having Mr. Fix build the Titanium Man armor.[citation needed]

Whenever his fancy stuff breaks, he freaks out.[citation needed]

During his initial confrontation with Iron Man, he almost completely dominated him and War Machine, as his armor was purely built for combat. However, as Mr. Fix had not yet been able to create a titanium and vibranium alloy for the suit, Tony was able to exploit the weakness of the armor in that once set on fire it cannot be extinguished. The armor soon melted into slag.[1] Later, a new Titanium Man armor was created and used by him on several occasions.

While being blackmailed, Hammer became paranoid and started using the Titanium Man armor to attack everyone he suspected, including his henchmen. After he used a zombie virus on his last man, Killer Shrike, Mr. Fix confessed that he was the one blackmailing Hammer as revenge for what he did to him and allowed Iron Man to reveal what he did to the world. Desperate, Hammer ran for the Titanium Man armor, finally revealing his double identity to the heroes. He set off a zombie gas bomb on the roof, and flew off, War Machine at his heels. After stopping the bomb, Iron Man took off to assist War Machine. With Extremis, he disabled the Titanium Man armor, opening it to pull Hammer out. He dropped him into his tower, where Mr. Fix trapped him in a gas chamber. Iron Man destroyed Fix in order to try to stop him and breach the chamber, but it was too late - Hammer had been turned into a brain hungering weakling. War Machine suggested they call S.H.I.E.L.D. and have them examine if the zombie effect can be reversed.[2]

Seemingly those of the Justin Hammer of Earth-616. 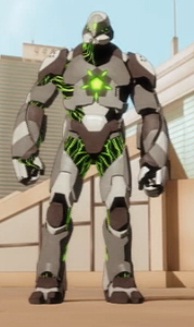