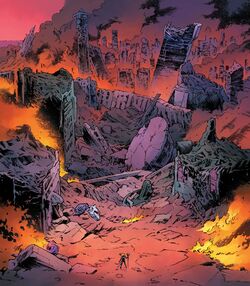 K'in-Al was an experimental city founded by the Kree/Skrull Alliance in the planet Mar-Da'en. It was meant to be a sanctuary where Kree and Skrulls could live peacefully together.[1] It was destroyed by human Wastrel as part of his crusade against the Kree.[2] The only survivor was Lauri-Ell, causing her to become blamed for the attack and cornered by Alliance soldiers.

When Captain Marvel arrived at the ruins of K'in-Al to apprehend Lauri-Ell, she became convinced that Lauri-Ell, who had turned out to be her half-sister, was innocent, and left K'in-Al with her.[1] Captain Marvel then returned to K'in-Al to investigate the explosion, and encountered Wastrel, who feigned to be doing community service for the Kree following his previous incarceration from which he had already escaped.[3] After catching notice of Wastrel's bluff, Captain Marvel returned to K'in-Al and managed to apprehend him with the help of a group of her allies.[2]

Like this? Let us know!
Retrieved from "https://marvel.fandom.com/wiki/K%27in-Al?oldid=6191368"
Community content is available under CC-BY-SA unless otherwise noted.