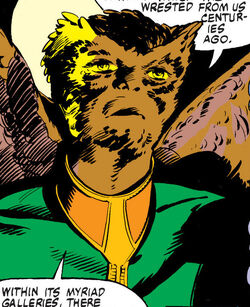 K'lm Fhet was a warrior of the bird people of Aerie Shalan, one of the artificially engineered races native to Pangea, the region of Antarctica where the Savage Land is situated.

Wings: K'lm Fhet 's possesses the superhuman ability to fly by means of his natural wings, which spanned sixteen feet from wingtip to wingtip.

Aerial Adaptation: K'lm Fhet's entire anatomy is naturally adapted to flying. Their bones are hollow like birds, making them weigh far less than usual than humans. Their bodies is virtually devoid of fat and possesses greater proportionate muscle mass than an ordinary human does. Their eyes are specially adapted to withstand high-speed winds which would hurt the average human eye. The Aerians possess a special membrane in their respiratory system enabling them to extract oxygen from the air at high velocities or altitudes.

Peak Human Strength: The Aerians possesses greater physical strength than an ordinary human equal to their body weight and can lift about 500 lbs.

Vulnerable to attack if their wings are damaged.

Like this? Let us know!
Retrieved from "https://marvel.fandom.com/wiki/K%27lm_Fhet_(Earth-616)?oldid=6427252"
Community content is available under CC-BY-SA unless otherwise noted.