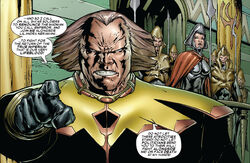 Ka'ardum was among the Shi'ar to assist Lilandra Neramani and the X-Men in their battle against D'Ken, Deathbird and Vulcan in order to save Xavier. After a failed coup against Lilandra, he was secretly "retired" to an asteroid prison where he would live out his days in exile. He was eventually freed by Lilandra to battle the resurgent Emperor D'ken.[1]

When D'Ken was killed and Vulcan assumed the throne, Ka'ardum fought alongside Lilandra, the Starjammers, and the rebel fleet against Emperor Vulcan. After Vulcan won the support of the Shi'ar people in war against the Scyar Tal, however, Ka'ardum chose to join Vulcan and swore allegiance to the throne once more.[2]

He was last seen in the service of Praetor Kallark.[3]

Like this? Let us know!
Retrieved from "https://marvel.fandom.com/wiki/Ka%27ardum_(Earth-616)?oldid=5853588"
Community content is available under CC-BY-SA unless otherwise noted.