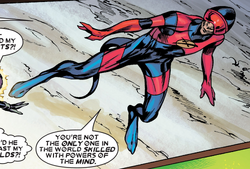 Kaidan captured the X-Man Marvel Girl by surprise and manipulated her into thinking she was born and bred Hauk'ka. They then captured the remaining X-Men and imprisoned them in their well-organized citadel. They formulated a plan to use Storm to manipulate the weather and cause global hyper-storms to wipe out the human race, afterward claiming Earth for themselves. [3]

They managed to initiate these storms using Marvel Girl's power to amplify and sustain Storm, to critical levels. It took the alliance of the X-Men, Savage Land Mutates and even the regretful Hauk'ka to reverse the global effects of Storm's hyper-storms. They now appear to be on neutral terms with the human race. [1]

Telepathy: can read minds and project his thoughts into other minds within a vast, radius.

Like this? Let us know!
Retrieved from "https://marvel.fandom.com/wiki/Kaidan_(Earth-616)?oldid=5352902"
Community content is available under CC-BY-SA unless otherwise noted.