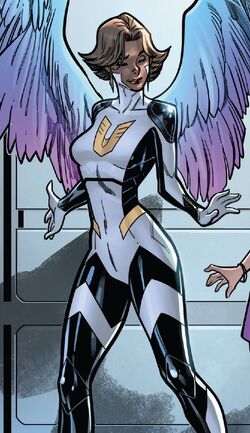 Kaila was an inhabitant of the planet Spyre.[4] Spyricans lived in a utopian society that prided itself on their use of an advanced scan called the Great Eye which allowed every Spyrican to find their perfect match, thus maintaining their society's harmony.[5] When she became of age, Kaila had her finding ceremony and peered through the Great Eye. At the same time 44 lightyears away on Earth, the human Johnny Storm was looking through a similar faster-than-light scanner that his acquaintance Reed Richards had used to probe space for a habitable planet to explore. Both youngsters were connected by a vague pull that compelled them to find each other.[6]

On Spyre, Richards' probing emissions alerted the Spyrican's patriarch, the Overseer, of the scientist's impending incursion.[6] The Overseer attempted to stop the flight of Richards' rocketship by manipulating and increasing the intensity of a cosmic ray storm his vessel had to pass through, which caused the ship to crash back to Earth.[5] The incident also bestowed the four passengers, among whom was Johnny Storm, with superpowers and they became the Fantastic Four. Dreading the newly-powered explorers could pose a threat to Spyre if they decided to resume their original mission, the Overseer devised a procedure to harness cosmic rays and imbue them on volunteering Spyricans to give them powers to match the Fantastic Four.[1] Compelled to encounter her soulmate now that she knew he was one of the "Four-Told," Kaila pulled through all the training required to become one of the Unparalleled. Gaining avian-related powers, she adopted the identity of Sky and became one of her planet's champions alongside her own father, Darmo, better known as Sidearm.[6]

Over a decade after the Fantastic Four's first attempt to reach Spyre, they sought to complete their mission.[7] When they approached Spyre, the Overseer alerted the Unparalleled of their arrival. The protectors intercepted the ship and subdued its passengers. In the process, Sky confronted Johnny Storm, the Human Torch, and knocked him out. After the Fantastic Four proved they meant no harm, Sky took Johnny to her quarters in the Hall of Heroes and paired him with a Soul Binding, one of a pair of special bracelets that could only be worn by soulmates.[4] When Johnny woke up, Sky explained to him the situation. He recognized the same pull he felt for her, and they got acquainted, but their communion was interrupted by Mister Fantastic and the Invisible Woman signaling for help after the Overseer had ordered their deaths as Reed deduced his involvement in the incident that gave them powers. When Johnny and Kaila rushed to check on Johnny's family, Reed attacked Sky, mistaking her intentions, but to his and Sue's disbelief, Johnny stood by his soulmate.[8]

During this time, The Thing had rallied the Monster Mob; the outcasts of Spyre who had been banished from society due to the Overseer's cosmic ray exposure turning them into monsters. He had started a rebellion to reclaim their place in civilization, but they came to a halt once The Thing encountered the Human Torch, who was helping Sky defuse the uprising. At this point, Mister Fantastic appeared and exposed to the public the Overseer's role in the creation of the Fantastic Four.[1] Sky turned against the Overseer and the Unparalleled, and attempted to get them to stand down. As a result of the revelation, The Thing tried to kill the Overseer at the Tower of Over-Site, causing the building's collapse. The Unparalleled, the Fantastic Four and the Monster Mob joined forces to contain the falling debris, but then all Spyricans shunned the Fantastic Four since they blamed their arrival for the current crisis.[5] Sky distanced herself from the Human Torch even after the Fantastic Four and the Unparalleled made peace, but when they were about to leave the planet she returned to Johnny to accompany them on their trip and try to make their destined relationship work.[9] When Sky settled on Earth, The Thing's wife Alicia Masters offered Kaila her old apartment.[3]

Sky would assist the Fantastic Four during subsequent adventures, like confronting the Mole Man,[3] the Dark Harvest,[10] and the Griever at the End of All Things.[11] Kaila would also have an easy time settling in, making acquaintances with her neighbors in SoHo in a matter of weeks, becoming their local super hero, and even finding a job. Kaila's relationship with Johnny also managed to progress, overcoming his initial reluctance to believe they were soulmates,[2] and they grew closer together.[12]

Like this? Let us know!
Retrieved from "https://marvel.fandom.com/wiki/Kaila_(Earth-616)?oldid=6467844"
Community content is available under CC-BY-SA unless otherwise noted.