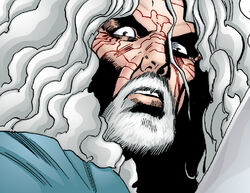 Take it from someone who knows, kid. There's a big difference between blood and family.

In the MC2 reality, Kaine rescued a baby May Parker from Norman Osborn and returned her to her parents.[citation needed]

Kaine became a partner of the Kingpin of Crime but was betrayed. Daredevil sacrificed his life to save Kaine, and Kaine took him to the regeneration chambers, where he was also trying to help Reilly Tyne. He summoned the demon, Zarathos, to help them, but Zarathos attempted to take Reilly's body. Daredevil fought the demon, and in the end, Reilly became Darkdevil, with the powers of a demon and the heart of a hero.[citation needed]

Kaine later was sent to jail after Spider-Girl stopped him from killing the Kingpin. He was offered a position on a new government team for reformed super-villains. He accepted, and had under him Big Man (son of Hank Pym and Wasp), Quickwire (a former Spider-Girl villain), and formerly Raptor and Normie Osborn (Raptor being fully pardoned and Normie losing his powers).[citation needed]

Seemingly those of the Kaine Parker of Earth-616.

Seemingly those of the Kaine Parker of Earth-616.

Like this? Let us know!
Retrieved from "https://marvel.fandom.com/wiki/Kaine_(Earth-982)?oldid=5672473"
Community content is available under CC-BY-SA unless otherwise noted.