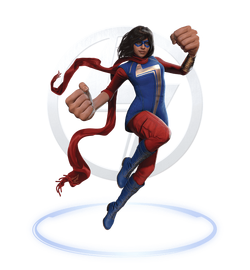 A young, whip smart Pakistani American woman with an optimistic personality, Kamala Khan is fueled by a profound desire for positive change and is determined to combat injustice wherever she finds it. Kamala has been an Avengers fan girl since she was a child – besides thinking they are just cool, she admires them (and especially Captain Marvel) because they represent the best humanity has to offer – and on a deeper level, they inspire her to become the best version of herself. Kamala was exposed to Terrigen Mist during A-Day, which activated the dormant Inhuman genes within her, awakening her healing factor and polymorphic powers. After hiding her abilities for years, adventure calls her to action from her home in Jersey City and inspires her to become a hero in her own right.[1]

Like this? Let us know!
Retrieved from "https://marvel.fandom.com/wiki/Kamala_Khan_(Earth-TRN814)?oldid=6100832"
Community content is available under CC-BY-SA unless otherwise noted.