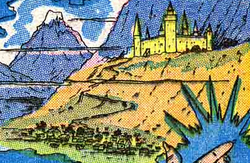 Kamar-Taj is an isolated community in the Himalayas near what is now Tibet.[2] Kamar-Taj has long been home to sorcerers and mystics. It is the main home of the Ancient One and the Sorcerer Supreme of Earth.[3]

Kaluu was born over five hundred years ago in Kamar-Taj. Kaluu and Yao became fellow students of the mystic arts.[4] Varnae, the eldest of the true Vampires, met with Kaluu and imparted to him knowledge from the primeval compendium of black magic known as the Darkhold.[5]

Subsequently, Kaluu set about to make himself ruler of Kamar-Taj. While Yao continued his studies, Kaluu used his sorcery to influence the minds of the people of Kamar-Taj. Eventually, Kaluu and Yao together cast a spell that eliminated disease, poverty, and suffering from Kamar-Taj and granted its people immortality. Shortly thereafter, the people of Kamar-Taj, responding to Kaluu's magical influence on their minds, crowned him as their king. For over a year Kaluu organized the men of Kamar-Taj into an army of conquest.[6]

Kaluu has since claimed that he was only trying to bring a lasting peace to Kamar-Taj by making it so powerful none of the Asian conquerors of that time would dare attack it.[5]

After a young America surgeon, Dr. Stephen Strange, was injured in a accident that ended his career tried to find a cure. He heard rumours of the mystical Ancient One, Strange pawned his last possessions for a ticket to the East. Strange found "Kamar-Taj" but the aged sorcerer refused to cure him, instead offering to teach him in mysticism. Strange refused, but couldn't leave immediately due to a sudden blizzard. While staying for the duration of the storm, Strange witnessed the Ancient One's apprentice, Baron Mordo, secretly attack the teacher with mystically summoned skeletons, which the old man easily dispelled. Strange, his scepticism eroding, confronted Mordo about the treachery but Mordo responded with restraining spells that kept Strange from warning the Ancient One or attacking Mordo physically. Amazed by these displays of magic, Strange underwent a change of heart. Deciding that the only way to stop Mordo was to learn magic himself in order to challenge Mordo on his terms, Strange accepted the Ancient One's offer. Pleased by Strange's acceptance for unselfish reasons, the Ancient One removed the mystic restraints, explaining that he was well aware of Mordo's treachery but preferred to keep Mordo close by in order to control and possibly change him.[7]

A man tormented by nightmares comes to Dr. Strange to seek aid. Dr. Strange promises to help. He traveled in spirit form to Kamar-Taj. The master tells Strange to depend on his magic amulet if danger threatens.[1]

Sigurd travelled the Kama-Taj to make a deal with Kaluu, to basically reincarnate after his death, while being able to know whether he lied or not during the pact. After binding their pact with blood, Kaluu revealed himself as Mephisto, who had tricked Sigurd into binding with blood a contract, which was disguised as the mat below them, to send his soul to Hell. However, the contract was revealed not to be the one Mephisto had made for Sigurd, but a new one which Loki had swapped. Under the terms of the new contract, Mephisto had to return to his realm, as Sigurd was sent back to Asgardia, the latter being the objective of a mission the All-Mother had thrust upon Loki.[8]

In Earth-2772, Kamar-Taj is located in Tibet. Dr. Stephen Strange begged Dr. Gina Atwater to help him get to Tibet and then undertaking a gruelling hike up into the Himalayas, Stephen begins his training at a hidden monastery under the tutelage of the Ancient One a diminutive old man. Soon after Strange arrives, the other students leave to combat a pack of wolf-like creatures in Central Park. Not long after, the Ancient One is told by Wong and Mordo that some of the students died during the conflict. The conversation indicates that the number of assaults by mystical creatures has been growing recently. After several days of scrubbing floors and performing manual labour, Stephen is considering giving up and departs the monastery. As he walks through the snow, however, he flashbacks to a previous failure .During the procedure, April died and Strange has always blamed himself. The Ancient One appears in Stephen's mind and convinces him to let go of this past guilt and return to his training. The Ancient One detects two Chinous (reptilian monsters the size of a small house) approaching the Sanctuary and orders Baron Mordo to kill them one at a time. However, the arrogant Mordo disobeys and leads two separate teams to take them on. As a result, several of the weaker students are killed before the beasts are defeated. Later as the Ancient One mourns the loss of his disciples, he scolds Baron Mordo for his disobedience and tells him that he will never inherit the title of Sorcerer Supreme from the old master, but instead must train Doctor Strange — the true heir to the position. An angered Mordo later spars with Stephen, escalating the mock-fight into a deadly contest of skills. During the fight, Stephen institutionally absorbs Mordo's spell and deflects the energy back towards him. An enraged Mordo lunges to kill him, but Wong intervenes and tells Stephen that he will be taking over the training. A dejected Mordo leaves, now with true hatred in his eyes for Strange.[9]

In Earth-199999, Kamar-Taj is located in Kathmandu, Nepal. It provides a hub for the activities of the Masters of the Mystic Arts. The Kathmandu entrance is a nondescript wooden door, completely overshadowed by the trappings of the surrounding buildings. Beyond the door the site is much more lavishly appointed, with training grounds and accommodation for many students. A library holds what could be the most comprehensive collection of arcane lore anywhere on the planet. A planning room provides council space around a huge globe of the world, that can display a variety of graphical overlays, and three doors that connect Kamar-Taj to a trio of Sanctums around the planet (New York, London, and Hong Kong).[10][11]

Like this? Let us know!
Retrieved from "https://marvel.fandom.com/wiki/Kamar-Taj?oldid=6190224"
Community content is available under CC-BY-SA unless otherwise noted.