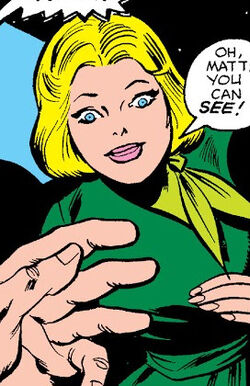 The past history of Karen Page of Earth-7848 mirrors that of her Earth-616 counterpart up until her early career working at the law office of Nelson & Murdock. In this reality, the fact that Daredevil was blind soon became public knowledge early on in his career. When the Owl came to force Matt Murdock to be his lawyer, he was prepared for Daredevil's arrival with sonic devices and took Karen Page captive.

Daredevil fought off the Owl and his men and sent them fleeing, his rescue of Karen tipping her off that Daredevil was really Matt Murdock. This revelation strengthened their relationship and brought the two lovers together. Karen pressed Matt to seek out the sight-restoring surgery of Dr. Van Eyck, and convinced him to go through with it even at the risk of losing his powers. She traveled to Matt to the nation of Lichtenbad and was present when Van Eyck was captured on trumped up treason charges by the guards of the country's ruler Duke Klaus Kruger. In Daredevil's final battle with Kruger, she learned that Van Eyck had gone alone to stop Kruger's Cobalt Cloud from menacing the world and told Daredevil. Matt prevented Van Eyck from sacrificing his life, and stopped the Cobalt Cloud himself, losing his enhanced abilities in the process.

After Van Eyck restored Matt's vision, Matt later decided to give up his costumed identity of Daredevil and ran for District Attorney of New York City, revealing his identity to the world. Karen stayed by his side until Murdock won the election and the two eventually married.[1]

Seemingly those of the Karen Page of Earth-616.

Like this? Let us know!
Retrieved from "https://marvel.fandom.com/wiki/Karen_Page_(Earth-7848)?oldid=6518334"
Community content is available under CC-BY-SA unless otherwise noted.