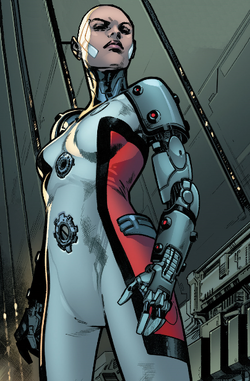 Karima Shapandar was once a police officer from India who was transformed into an Omega Prime Sentinel by Bastion of the Operation: Zero Tolerance program. It all started when Karima was dispatched to look after Neal Shaara (who would later become known as Thunderbird). Neal was looking for his brother, Sanjit, who had gone missing researching some mysterious disappearances in Calcutta. A bond quickly developed between the two, and they were on the verge of beginning a romantic relationship when they were attacked and captured by Bastion. Neal learned that Sanjit had become a Prime Sentinel, programmed to seek out and destroy mutants. Bastion intended to do the same to Neal and Karima, but the morphing process catalyzed Neal's latent mutant power, which destroyed the building around him. Sanjit fought his programming long enough to disable the other Sentinels, but died in the process.

As Neal cradled Sanjit's body, Karima quietly told Neal to run. She had discovered that she was a Prime Sentinel: humans transformed into Sentinels and set up as 'sleeper' agents, unaware of their programming until a nearby mutant activated them (such as Neal's usage of his mutant powers).

"I am an Omega Prime. Within moments I will have reached my full combat mode–with my core programming to destroy creatures like you. It is becoming increasingly difficult to even think of you as human. Your only chance is to disappear. Get as far away from India – and from me – as you can. Assume a new identity... a new life."

Neal refused, saying he loved Karima. Karima begged him to leave, saying she couldn't hold on much longer. Neal was forced to flee.

Karima later resurfaced on the decimated mutant homeland of Genosha, where she encountered Charles Xavier and Magneto. The two were able to disable her Sentinel programming and restore her mind, but the technological modifications to her body remained.

Karima stayed on the island with the others, working as a police officer to restore order while trying to adjust to her new form, which came into conflicts with her Hindu beliefs. It is assumed she left the island with most of the other residents after Decimation.

The X-Men discovered a disassembled Karima, along with Lady Mastermind, in a lab of the Fordyce Clinic that was running testing on mutants to see if someone can catch mutation like a disease. Beast reassembled her,[6] though she lost part of her memory from the moment she got disassembled. Rogue officially recruited her onto the team to help fight the Children of the Vault.[7]

Since then she, was able to help fix a teleporter in the search for Pandemic, and assisted in the fight that led to his defeat. After Rogue was infected with a virus by Pandemic, Cable took the team to his island so Rogue could be cared for. On the island, Karima helped the team and the island residents who were attacked by the Hecatomb.

Shortly thereafter, she was possessed by Malice via email virus. Thus, she was an unwilling member of the Marauders.[8][9] She was freed from Malice's possession by the young X-Man Pixie during a battle between the X-Men and Marauders on Muir Island.

After the battle, Karima returned to her senses, with substantial damage as a result of Malice's viral corruption; though her body had repaired itself, her actions as Malice had been erased from her memory. She found herself in company of Exodus's Acolytes, who apprehended Professor Xavier's body via member Tempo's time-slowing powers. In their headquarters, apparently far from Muir Island, she, Exodus and Voght cared for Xavier and sought to help him recover physically and return to full psychic capacity. This was achieved through the help of the then de-powered Magneto. With Xavier alive again, acolyte Frenzy had a change of heart and attempted to kill him once and for all, and Karima was damaged in stopping her. Xavier left after a psychic tussle with Exodus to restart his life and rediscover his ideals. Karima soon left them and joined the X-Men on Utopia, while using her Acolytes affiliation to convince them to come along.[10]

During the Second Coming, the X-Men used an engineered virus to defeat Bastion's army of Sentinels, but it also reactivated Karima's Sentinel programming, which was revealed to be powered by a Nimrod Series CPU Core, as was the entirety of the Omega Sentinel line. She attacked the X-Men with various lethal countermeasures attuned to their specific power set - attacking Psylocke & Hellion with sub-sonics, targeting Magneto with a non-ferrous rail-gun, blasting at Danger with an attuned beam cannon, using a neural disruptor for Random, and finally a liquid nitrogen cannon & pyronite plasma torch for Colossus. She was eventually stopped and almost destroyed by Hellion, leaving her in a comatose state.[11]

After the Avengers/X-Men conflict, Karima's body, now located in the Jean Grey School For Higher Learning, was infected by Sublime's sister, Arkea. Arkea claimed her body[1] and fought an intense battle with Rogue and Shadowcat within the Danger Room.

After being threatened with the ultimatum of her on board circuitry shorting out and resulting in a fatal shutdown unless some ember of the old Karima still burned within her inert host,[12] the Arkea-possessed Omega Sentinel eventually beat a hasty retreated via matter jump. This proved to be a strategic retreat, however; Arkea was still connected to the Jean Grey school's security system functions, easily usurping its automated Danger Room override, assaulting the entire infrastructure and its resident student body with hard light Arkea/Omega holograms.

With time, the X-Men and Sublime tracked both the bacterium and her host all the way back to Budapest, near a biomechanics facility close to the area where the Arkea entity first made earth-fall. Having taken full control of all the technically outfitted patients at the clinic, the bacteria-hosted Karima stated her plans to spread out across the globe and kick start a new evolution, all crafted to her liking.

Fortunately, a seemingly minute remnant of Karima's core personality managed to retake control of herself at the last second, just long enough to plunge Psylocke's psionic knife into herself, effectively purging Arkea from her for good. Returned to a normal, albeit severely weakened state of being, Karima was taken back to the school by her fellow female X-Men.[13]

Over a week of following tests conducted by Beast through his scans, Karima had been diagnosed as a true blue human for the most part, due to the purging of Arkea causing her mecha-cybernetic systems and the Omega Sentinel tech that powered it to cease functioning.[14] Having regained most of her former humanity back, Karima was at a crossroads in her life, wondering whether or not to return to police work back home in India, or to find where her talents and her heart really lay. During more tests in the basement of the school, an old friend of the X-Men, Monet St. Croix, came by to visit and for some TLC while mistaking McCoy's underground study for a gym.

Monet and Karima two began a fast friendship, but their bonding during a jog was interrupted by a brief firefight between them a hired mercenary crew led by a long-thought-dead Cortes, now possessing the recently-remodelled Lady Deathstrike. Monet was able to finish off the assailants, but not before Karima took a bullet to her shoulder; the Yuriko/Cortes amalgam managed to escape at the last second as the former took Karima back to base for medical attention. Despite this, Karima reinforced her resolve and willingly decided to stay on board with the X-Men: Omega/Prime tech or no, she was a cop through and through.

Arkea, now alive and possessing a somehow-revived Reiko, used the all-new Deathstrike's Body Shoppe to send out a pulse signal that activated multiple fragments of her scattered self, as well as deactivating Sentinels all across the globe. This interacted with the recently dormant Sentinel Tech inside Karima's body, causing her to hemorrhage and bleed profusely from the nose.[15] She later left the X-Men.[16]

Karima, now with her sentinel programming reactivated, travelled with the members of the Orchis group into space heading to a large space station called the Orchis Forge, built from a non-functional Mother Mold head. Their job was to make sure that the station could support human life, but Karima could not sense the presence of any machines aboard to help in the endeavor. Doctor Gregor affirmed that all the drones were retasked for mining duty, but if they needed more they could build them.[17]

As a Prime Sentinel, had advanced cybernetic nanotech responsible for superhuman strength, resistance to injury and regenerative abilities, electrostatic poles mounted on her arms, flight, and a selection of unspecified weapons and mechanisms that retract into her body and cloaking devices.

Damaged memory core drive greatly limiting her technological capacity, every time she is possessed it only worsens her decreased data stream.

Like this? Let us know!
Retrieved from "https://marvel.fandom.com/wiki/Karima_Shapandar_(Earth-616)?oldid=6488203"
Community content is available under CC-BY-SA unless otherwise noted.