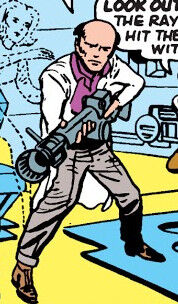 It is you who should worry, Thing! This atomic powered weapon will destroy you completely now that I have set to full intensity!

Karl Kort was an agent working for an unidentified communist country. His mission was to destroy US military bases and research installations using a large robot. Due to the severity of the damage caused by his acts of sabotage, it was mistakenly believed that only the Hulk could be the saboteur. Kort obtained a job at Desert Base, acting as assistant to Dr. Bruce Banner, where he collaborated on and then destroyed Banner's Project 34.

The Fantastic Four were called upon by General Thunderbolt Ross to capture the Hulk, whom he believed to be responsible for the destruction caused by the Wrecker. Kort, unnerved by their presence, inadvertently dropped his wallet while meeting the Fantastic Four. Rick Jones found the wallet and found a communist party membership card when he looked inside. Kort caught Jones and took him hostage, revealing himself to be the Wrecker. The Wrecker then sabotaged the test of an experimental rocket, which was being piloted by the Thing.

The Wrecker left a message for the Hulk instructing him to drive the Fantastic Four away from Desert Base if he wished to see Rick Jones again. Meanwhile, Kort took Rick into an old ghost town, via the catacombs beneath Desert Base. The Fantastic Four discovered the catacombs as well, and investigated them. The Hulk ambushed them, and their struggles brought them into the ghost town. After an inconclusive battle between the Hulk and the Thing, a ray blast from below struck the Hulk, knocking him unconscious. Ripping the ground open beneath him, the Thing discovered and quickly destroyed the Wrecker's robot. The Wrecker, aimed his atomic-powered ray gun at the Thing, only to have it knocked from his hands by the Invisible Girl, allowing the other members of the Fantastic Four to apprehend him. Kort was turned over to the military and the Hulk was cleared of any blame related to the recent spree of sabotage.[1]

Scientific Training: The Wrecker possessed sufficient experience and training to at least pose as a Doctor equipped to assist the research of Dr. Bruce Banner at a top government research facility.

Wrecker's Robot: The Wrecker had access to a large robot that he used to commit his acts of sabotage. Its primary ability appeared to be super strength. It may have tunneled under and destroyed the bases by destroying their foundations. It was made out of conventional steel, and it couldn't stand up to a single blow from the Thing.

Like this? Let us know!
Retrieved from "https://marvel.fandom.com/wiki/Karl_Kort_(Earth-616)?oldid=5848247"
Community content is available under CC-BY-SA unless otherwise noted.