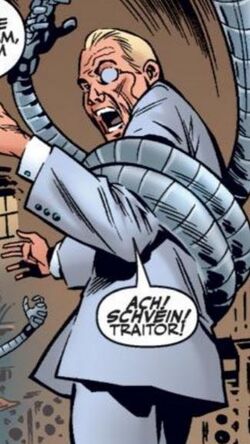 Karl von Horstbadden was a brilliant scientist who during World War II was made a commandant of the concentration camp in Auschwitz, one of the most notorious camps during the war. Following the defeat of the Nazis, Von Horstbadden fled to the United States. Wanted for war crimes, Von Horstbadden developed a new identity under the name Fritz Voltzmann. He maintained a life of anonymity until he was sought out by the international terrorist known as Yellow Claw who threatened to expose him if he did not agree to work with him. With no choice Fritz agreed and his first mission was to recruit the American criminal Rocky Miller to steal government plans. However this plot was foiled by FBI agent Jimmy Woo, but Fritz escaped capture. Fritz and Yellow Claw fled to a new hideout but Jimmy Woo followed the Claw's grand-niece Suwan to its location. He was captured and Yellow Claw ordered Fritz to kill him. However Suwan switched places with Woo, allowing the FBI agent to escape.[1]

Fritz next joined Yellow Claw aboard the S.S. Aloha in an attempt to kidnap two American diplomats. This plot also fell afoul of Jimmy Woo. Fritz was also present when Jimmy uncovered their next hideout necessitating them to flee.[2] Fritz next used his scientific genius to use the notes from Professor Ford to create a device to shrink down an army of Yellow Claw's minions to size in order to steal secret government plans. But they were forced to flee their hideout when Jimmy captured the spies. Fritz next used his robotics skill to construct a robot duplicate of Yellow Claw armed with a nuclear bomb, then tipped the FBI to its location tricking them into capturing the robot. However Jimmy Woo once again foiled the plan, discovered the ruse and having the robot dumped in a safe place to detonate harmlessly. Fritz then helped Yellow Claw develop a device that spread a mist of sleeping gas across Central City, but this plan was thwarted by Jimmy Woo as well.[3] The pair next constructed a device that transported members of the Living Shadows from another dimension which they used to rescue Suwan from the authorities, but they were later forced to return the creatures to their home dimension.[4] Fritz was also involved in Yellow Claw's plot to kidnap President Eisenhower bringing him to Mongolia. Fritz attempted to keep Jimmy Woo's G-Men at bay, but failed to stop the rescue. Fritz and Yellow Claw escaped in the destruction.[5]

Fritz apparently went underground for the ensuing decades. Dr. Doom and the Prime Mover used robots of Yellow Claw, Suwan, and Fritz against Nick Fury and SHIELD, until they were destroyed.[6]

When the true Yellow Claw resurfaced in the modern era, Fritz was reunited with his former master. He assisted Yellow Claw in attempting to destroy Washington D.C. with a nuclear warhead, but they were opposed by both Nick Fury and Nova.[7] When this was foiled by Nova, Fritz returned to Yellow Claw's base where they attempted to use a tidal wave device to create havoc, however this plot was also foiled by Nova.[8] However in the final battle, Yellow Claw blasted Nova with a hallucinogenic ray. Before Nova could shake off its effects, he knocked Fritz out of Yellow Claw's dragon ship sending him falling to his apparent death.[9]

Like this? Let us know!
Retrieved from "https://marvel.fandom.com/wiki/Karl_von_Horstbadden_(Earth-616)?oldid=6021081"
Community content is available under CC-BY-SA unless otherwise noted.