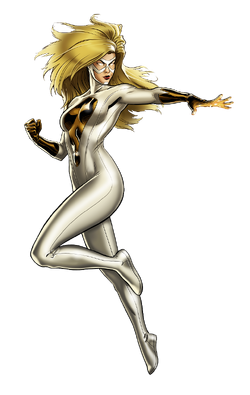 It's hard to confront the deep truths about ourselves. Naturally you flee them at first.

Dr. Karla Sofen was a psychologist who used her abilities to manipulate her patients. One of them was the original Moonstone, who Sofen convinced into giving her the Kree Lifestone which gave him his powers. Karla absorbed the stone and acquired its powers, with which Karla became a criminal for hire.[1]

Moonstone first appeared alongside Hydra when the terrorist organization tried to take over Doctor Strange's Sanctum Sanctorum. She was defeated by Ms. Marvel, who after the battle took the Lifestone from her and left her to be taken to custody by S.H.I.E.L.D..[1]

Moonstone later escaped from the Raft, and recovered her gem, which was stolen during one of the riots in said prison. She joined Baron Zemo's fraction during the schism between he and Viper for being the right hand of the returned Red Skull. She was defeated by Captain America and the Alliance.[1]

She later returned, and allied herself with the Mindless Ones during the demon outbreak brought by Mephisto, commanding them to gather Isotope-8 for her, as her gem reacted powerfully to that material. She was defeated by Ghost Rider.[1]

When Dell Rusk was temporarily put in charge of the Isotope-8 control by the World Security Council, for which he created his own team of Avengers composed of "reformed" criminals. Moonstone joined them when they started restoring the order in conflicts they secretly started. She was defeated by Ares.[1]

During another, yet small, demonic invasion in Manhattan, Moonstone reappered, still with no relation with the event. She was pinned down by Ms. Marvel, who defeated her in a hand to hand combat.

Moonstone supposedly decided to redeem herself and show she wasn't a bad person, for which she joined S.H.I.E.L.D.'s Alliance.

She was one of the numerous superhumans captured by Arcade when he turned a portion of New York into his new Murderworld. In order for the villain to release her, she was forced by Arcade to fight one of her former lovers, Hawkeye.[1]

Karla's powers are the result of her fusion with a gravity stone designed by the alien Kree.

Like this? Let us know!
Retrieved from "https://marvel.fandom.com/wiki/Karla_Sofen_(Earth-12131)?oldid=6057642"
Community content is available under CC-BY-SA unless otherwise noted.