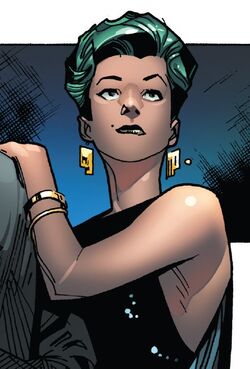 Following the apparent demise of Silver Sable, Symkaria's last living royal Countess Katarina Karkov rose to power as monarch.[3] She allied herself with Norman Osborn and exploited the resources of Symkaria, turning the country into a weapons-making war machine for Osborn's Goblin Army, enslaving Symkaria's people in the process.

Despite being sentenced to house arrest, Karkov's influence continued growing. Since Symkaria's economy still depended on arms manufacturing contracts, the country mantained its newfound military strength, which was not taken kindly by Symkaria's neighboring country Latveria following Doctor Doom's return to power. With border skirmishes increasingly rapidly, Karkov intended to use the war to return to power. To this end, Countess Karkov employed the mercenary Hitman to target Doctor Doom when he visited New York City for a UN hearing.[5] Expecting Doom to send a decoy Doombot to the hearing, Hitman was provided with a smart bullet which allowed Karkov to infiltrate the Doombots' network in contact.[6]

In retaliation for the apparent attempt on his life, Doom summonsed an army of Doombots to besiege Manhattan.[7] Spider-Man convinced Doom to retreat, but Karkov had the Doombots hacked and used them to damage cultural institutions and infrastructure. Unwilling to admit that he had lost control of his own network, Doom accepted the blame for the attack. As a result, the international community rallied behind Symkaria, pouring money and soldiers into the country's military efforts to Karkov's benefit.[8]

Following a failed attempt of imprisoning Doctor Doom by framing him for a staged terrorist attack, Doom returned to power and agreed to help the world leaders in dealing with the black hole created from the attack, but on the condition to invade Symkaria. The war was brief, and Symkaria was successfully made part of Latveria after Doom killed Karkov during a sword fight.[9]

Expert Swordswoman: According to herself, Countess Kravok was trained to be the best fencer in Europe.[4] However, she proved to inferior to Doom's combat.[9]

Like this? Let us know!
Retrieved from "https://marvel.fandom.com/wiki/Katarina_Karkov_(Earth-616)?oldid=5831181"
Community content is available under CC-BY-SA unless otherwise noted.