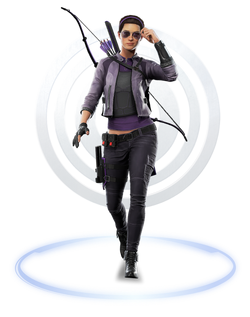 Kate Bishop is the apprentice of former Avenger Clint Barton better known as Hawkeye. Around the age of 19, Kate became Clint’s protege and was being trained to be inducted into the Avengers. However due to the events of A-Day which resulted in the Avengers being disbanded, this never came to fruition and Kate and Clint went under ground as A.I.M. effectively outlawed all superheroes. Sometime after the reformed Avengers had defeated M.O.D.O.K., Clint and Kate were looking for Director Nick Fury when they stumbled across Monica Rappaccini’s Tachyon relays which were causing disruptions across the world and affecting the space time continuum. During their investigation Clint was captured by A.I.M. Determined to rescue her mentor Kate set out to save him and came across the Avengers during one of her raids on their base.[1]

Like this? Let us know!
Retrieved from "https://marvel.fandom.com/wiki/Katherine_Bishop_(Earth-TRN814)?oldid=6083123"
Community content is available under CC-BY-SA unless otherwise noted.