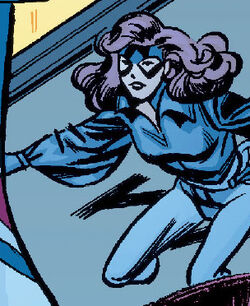 The past history of Kitty Pryde on Earth-9997 presumably matches that of her Earth-616 counterpart. In recent times, Kitty was killed saving Colossus from a bullet that was meant for him while Colossus could not shift into his metal form. Instead of phasing the bullet through her, she heroically took the bullet and was killed.

Since her death Kitty Pryde has remained in the Realm of the Dead, fighting pointless battles against the resident super-beings that have also died. After Mar-Vell destroyed Death and created Paradise, Kitty Pryde was one of the many super-beings that who would be brought to this new afterlife. There she would consume a shard of the Cosmic Cube to create her own ideal paradise.

Her fate following the invasion of Paradise by the Kree remains unrevealed.

Seemingly those of Katherine Pryde of Earth-616.

Like this? Let us know!
Retrieved from "https://marvel.fandom.com/wiki/Katherine_Pryde_(Earth-9997)?oldid=6007273"
Community content is available under CC-BY-SA unless otherwise noted.