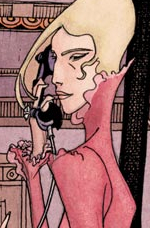 Kathryn married into the fifth wealthiest family in the United States at a relatively young age. Kathryn Worthington was the mother of Warren Worthington III, also known as the X-Man Angel. Kathryn and her husband Warren Jr. were unaware that their son was a mutant.[2]

During a visit to Xavier Institute, Kathryn and Warren happened to bump into Magneto, the X-Men villain who had taken over the school at the time. Magneto used his powers to put the Worthingtons in a trance. They slept the day away while the X-Men defeated Magneto. Professor X erased their memories of the encounter and they went on finish their visit of the school.[3]

After Worthington Jr's death, Kathryn died from poisoning before marrying Warren Jr.'s brother Burt, who would have come to control the entire Worthington fortune. Burt had arranged for Kathryn to die after he had married her.[4]

Like this? Let us know!
Retrieved from "https://marvel.fandom.com/wiki/Kathryn_Worthington_(Earth-616)?oldid=5217899"
Community content is available under CC-BY-SA unless otherwise noted.