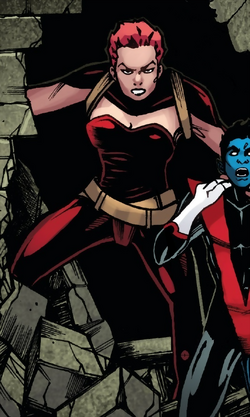 Katrina Luisa van Horn was a talented skier who was challenged to a battle of the sexes skiing contest by a chauvinistic male skier. During the ski run, the man cheated and cut her off, sending them both plummeting into a ravine. He was killed, and Katrina was crippled. Katrina became fanatically opposed to men, and a group of militant feminists somehow financed her being fitted with an exoskeleton that gave her superhuman strength and durability.[8]

Soon after, dubbing herself the Man-Killer, Katrina assassinated the anti-feminist mayor of Chicago, but was soon opposed by the heroes The Cat and Spider-Man. Man-Killer was defeated, and was incensed to discover that her exoskeleton was created by male scientists working for A.I.M..[8]

Later, Man-Killer became affiliated with Hydra, and was sent to abduct prospective S.H.I.E.L.D. director 'Foggy' Nelson. As a result, Man-Killer clashed with the heroes Daredevil and Black Widow, and was defeated when the Widow's ally Ivan Petrovich sabotaged her exoskeleton.[9][10][11]

Man-Killer resurfaced as an agent of Justin Hammer, and was part of an army of super-villains who attacked Iron Man and was defeated.[12][13]

Man-Killer was seen again when she abducted an influential female revolutionary, Hildy Dawes, from a courtroom. She came up against Spider-Man once again, this time with She-Hulk, who in her civilian identity of Jennifer Walters was Dawes' lawyer. Man-Killer was defeated when Dawes grabbed some power cables, electrocuting them both.[14]

Surviving the electrocution, Man-Killer returned as a member of a new incarnation of the Masters of Evil, and as part of that team battled the villains-turned-heroes the Thunderbolts several times. She now no longer needed her exoskeleton, having its powers within her body.[15] However after their defeat she left the team.[16] After a few brief skirmishes with the Thunderbolts,[17][18] she rejoined the team,[19] but was defeated by the Thunderbolts once again.[20][4][21][22][23]

Using the name Wilma, Man-Killer started working as a bartender in a Colorado bar.[24][25] One of the bar's patrons was the Thunderbolts member Atlas, and the pair of them recognized each other but did not say so. The two built up an uneasy friendship, and Katerina strongly hinted that she was a lesbian. She began to ponder whether she could join the Thunderbolts herself, but when Atlas got in a fight with the hero Wonder Man in her bar, she refused to help him as he was a man.[26]

She later drifted back into the employ of Justine Hammer, where she again fought the Thunderbolts.[27] Man-Killer changed sides when she discovered Hammer had double-crossed her by fitting her body with a bomb to control her. Re-outfitting herself as a "hero" called Amazon, she joined the Thunderbolts.[28][3][29] After several adventures with them,[30][31] she soon left them, deciding she didn't have what it took to be a hero.[32]

Amazon turned back to crime, robbing a bank and fighting Spider-Man once again. She briefly flirted with a career as a professional wrestler before she joined a team of Thunderbolts led by Baron Zemo in his campaign to destroy Photon. To help in the battle, Fixer equipped her with size-altering Pym Particles. She was pitted against her former friend Atlas whom defeated her due to him having more experience with size alteration.[33]

During Dark Reign, she fought against the New Warriors when they launched an attack on Camp H.A.M.M.E.R..[34] She fought Rage during assault. As the resistance were joined by the Shadow Initiative the Hood's Gang left to help during the Siege of Asgard, leaving Katerina and the remaining team behind to combat the heroes with their Norn Stone-enhanced powers.[35]

The Once and Future Juggernaut

Man-Killer was next seen back at the bar in Colorado when she along with some others heard the call of the Crimson Ruby of Cyttorak. Deciding to go, she left Colorado and headed to Thailand where the gem was located. She arrived there at the same time as the others were battling members of the X-Men. She immediately entered the brawl by taking out Northstar and Nightcrawler. During the fray the original possessor of the gem, Cain Marko teleported in with the Vanisher to presumably reclaim his powers. Man-Killer then went one on one with Marko, but still having some residue strength left over from being the Juggernaut, knocked Man-Killer straight out of the temple.[36]

Rejoining the Masters of Evil

Man-Killer joins up with Baron Helmut Zemo's third incarnation of the Masters of Evil and accompanies them in their fight against the Thunderbolts.[37] During the fight between the Masters and Thunderbolts, the cosmic cube entity Kobik threw a tantrum and threatened to rip all of reality apart. Man-Killer and her teammate Whiplash were caught in a maelstrom whipped by Kobik. Man-Killer held on to Whiplash, but Whiplash kicked Man-Killer away to save himself. Man-Killer collided with Kobik and was disintegrated.[38]

Like this? Let us know!
Retrieved from "https://marvel.fandom.com/wiki/Katrina_van_Horn_(Earth-616)?oldid=6106030"
Community content is available under CC-BY-SA unless otherwise noted.